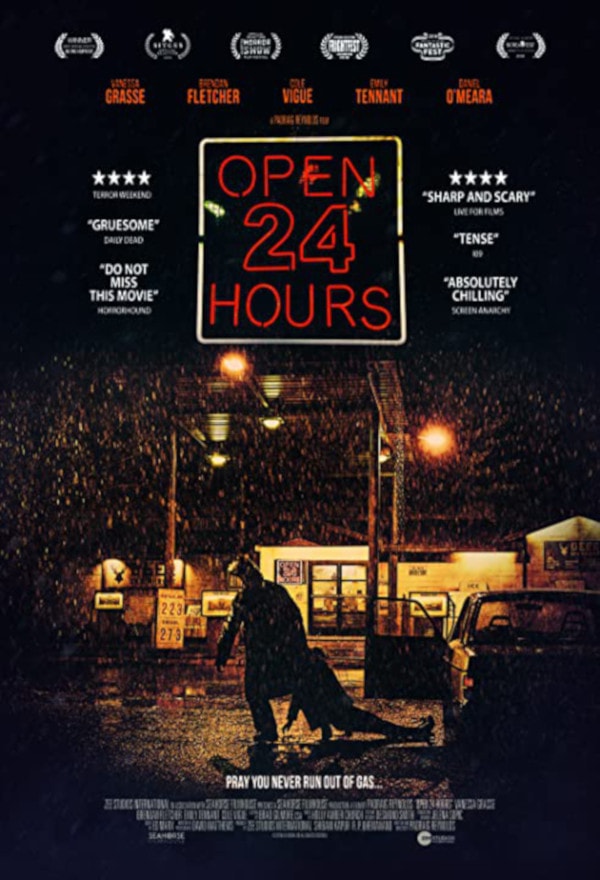 It's 2 a.m. and a gas station clerk doesn't know where her escaped homicidal ex is — a tough way to start a new job, no doubt...

Traumas abound as a woman takes a night-shift job at an isolated gas station while tryin to get on with her life.

Here’s a dirty little secret about what everybody calls the “good ol days.”

Stuff was closed a lot.

Seriously — picture this situation. It’s 1 a.m. and you just ran out of sour cream-and-onion pork rinds, and you’re on your last can of a six-pack and Joe Bob is going to start his third flick (he sometimes did triple features) on Drive-In Theatre — Emanuelle in America (the one with the horse).

But it’s 1 a.m. And it’s 1988. And the corner convenience store actually closed at 11 p.m. because people actually went home and there wasn’t too much money to make selling Slim Jims at that neighborhood storefront between 11:01 p.m. and oh, say. 5:59 a.m. when folks came in to get their coffee and daily newspapers. As the saying goes, you are more SOL than the star around which our humble solar system revolves from a snacking replenishment perspective.

Now you could probably improvise — make some cheese sandwiches like the guys from Things and then tough it out through the next couple of hours as you watched Laura Gemser do her best impersonation of Sylvia Kristel through a haze of dubbing and soft-focus lighting on The Movie Channel. But, really, the only places that would be typically open 24 hours from a retail perspective at the time would be truck stops off interstates because Jerry Reed still needed to fuel up the Kenworth and maybe a few Waffle Houses because Jerry Reed or any other truck driver (usually accompanied by an orangutan until there were laws against that) still needed to eat. Take it from a Mutant who lived through that era (although I wasn’t of driving age).

And, believe it or not, it wasn’t just Chick-Fil-A that shut down on Sundays. Most, if not all, shops weren’t even open. If you didn’t get into the store by 11 p.m. Saturday night, then you had to WAIT UNTIL MONDAY to reload the Cheez Wiz repository and get more nacho chips and Mr. Pibb to make it through the weekend, and woe is (are?) you if it was an NFL football Sunday.

But SOMETHING changed these past 30-plus years.

Hey, that’s commerce for you.

And speaking of a bustling oasis of commercialism shining like a slightly off-yellow halogen bulb enclosed in an age-clouded Mason jar flickering in a murky backwoods night, the flick we’re taking a look at this week is Open 24 Hours.

It deals with Mary (Vanessa Grasse, Leatherface — the TCM movie from 2017) who is dealing with, in order:

Oh, she also set him on fire.

All that would probably be a movie in and of itself. (In fact, if you squint hard enough, Farrah Fawcett was in a TV drama flick from the 1980s called The Burning Bed that could in some slight way be seen as an inspiration if you get rid of the whole serial killer thing and just concentrate on the barbecuing your significant other part.) But most of that psychological trauma is just an excuse to explain why she has to take pills to prevent these visions she has of her ex dressed up in one of those long hooded raincoats from traumatizing her any more than she already is.

Trauma aside, she really is trying to move on. At the start of the flick, thanks to her encouraging parole officer, she’s trying to re-enter the workforce as a night-shift clerk at a gas station/general store off a rural route where, in addition to gas, they sell pickles from one of those big old jars full of brine and other stuff that they keep in big old jars as well. Spoiler alert: She gets the job.

And yes, we have seen this before. The lone clerk facing the perils of a shift where she’s all by herself at night in an isolated area is a well-known trope that was featured in John Carpenter’s Body Bags, and the closely related urban legend of a customer menaced by a killer during a stop at an all-night gas station was featured in the 1980s anthology Nightmares, and, you guessed it, Urban Legend.

So it’s no surprise that Mary’s first night is a mélange of getting hit on by weirdo customers, getting yelled at by weirdos on the phone, holdin on to weirdos’ lost credit cards, weird hallucinations involving weirdos that may or may not be real and, oh yeah, did her killer boyfriend get out of prison or didn’t he?

• Best Part MC Hammer Would Have Approved Of: The killer has a hammer.

• Best Part MC Hammer Would Not Have Approved Of: The killer, in fact, ignores the title of MC Hammer’s greatest album and does, in fact, hurt em.

• Best Gross-out Scene: The whole roundup in the back room that happens later on in the third act.

• Second-best Gross-out: We find out James, the “Raincoat Ripper,” sure isn’t gonna win any beauty contests after Mary barbecued him.

Three stars for Padraig Reynolds’ flick. Three and a half if you’ve ever worked the night shift and dated a serial killer.

Check it out on Shudder (you may have heard of it), Tubi, Amazon Prime and streaming at a whole bunch of other places. It’s also out on Blu-ray and DVD.