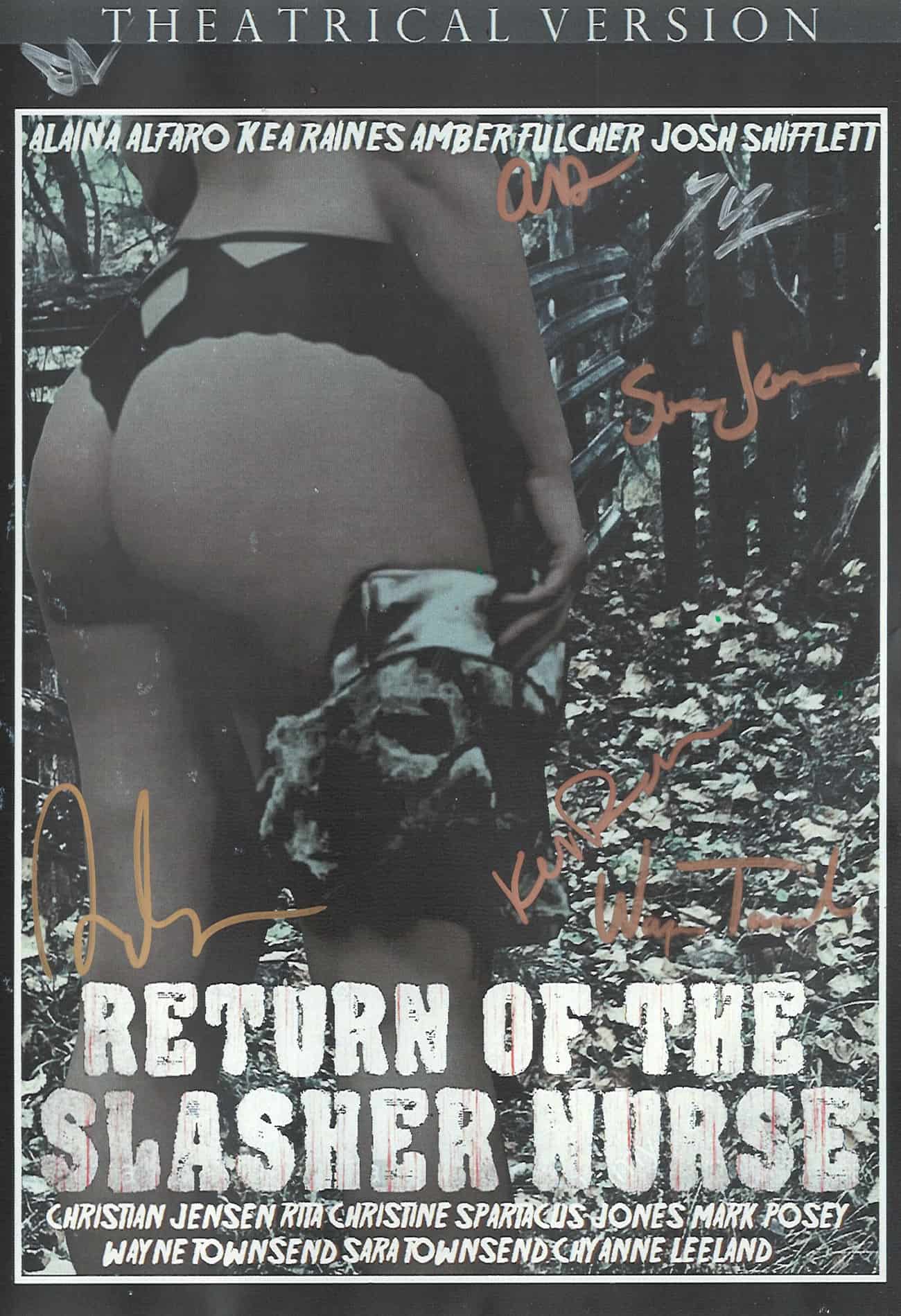 Ben Nagy reviews ‘Return of the Slasher Nurse’: Her Last Name Ain’t Nightingale, and Her Sister’s No Better

A killer in a nurse's outfit and her sister kill a bunch of people while a couple of their victims' relative decide to go after em in "Return of the Slasher Nurse," an indy horror flick out of Orange County, Virginia.

Orange County, Virginia’s answer to Leatherface uses an axe and goes out killing a whole mess of folks with her younger sister

This week’s feature is Return of the Slasher Nurse. I was unaware that there was a Slasher Nurse to begin with, so this is another one of those cases where I’m getting my feet wet on a series well after the first flick was unleashed.

The first flick put out with the Anneke Mitchell Slasher Nurse character was Curse of the Slasher Nurse by David Kerr’s Slasher 15 production company out in Virginia. This sequel doesn’t waste time getting rolling.

We start out with Lily (Lilian Kerr), the younger sister of the original Slasher Nurse, walking home with her frenemy Alice through the woods after a day at school. Both of them are early teens, and after Alice tells Lily not to hang out with her at school because she’s so weird, Lily gets Alice to go off screen into the woods and get killed.

Alice’s Grandpa Roger notices that Alice hasn’t come home yet, finds some blood out in the woods and goes straight to Lily’s Aunt Lisa’s house to confront them. For his trouble and for threatening to call the cops, he gets scalped with a pair of hedging shears. So two dead bodies in the first five minutes or so, a promising initial body count …

and cue the opening credits with a newspaper clip montage on what happened in the first flick — basically there’s a woman in a nurse’s outfit roaming around Orange County, Virginia, making campers disappear and her sister might have a connection to it. Ya think? Cause if not, angry Grandpa Roger was scalped in vain.

After the opening credits, there’s a 10-member UFO flying-saucer Chariots of the Gods cult led by a dude named Theo meeting out in the woods. Seven of the 10 die after consuming a Jim Jones special, the Slasher Nurse (Kea Morbidrella Raines, who helped do the special effects) axes Theo in the head. A woman cult member gets a ball bat to the head from the more grown-up Lily (Amber Fulcher, who also helped to do the special effects), then a pitchfork through the leg and then gets axed by the Slasher Nurse and finally, William, a clumsy guy who was just in the cult for the chicks and fouled up the ceremony becomes the last victim — so 12 dead bodies in the first 15 minutes.

This pace isn’t maintained because now we’ve got to get to the plot part of the flick. We meet our protagonist, Kara Warden (Alaina Alfaro), whose sister is missing, presumably a prior victim of the Slasher Nurse. She visits her therapist and confronts a now-retired police officer who was in charge of the case because she feels he didn’t put enough pressure on the Mitchell sisters’ father. She meets up with Jax (Joshua Shifflett), the brother of another victim, and they decide to take matters in their own hands with Lily and Anneke’s dad and this course of action has em end up with both police and the two homicidal sisters on their tails.

The next hour and a half has a lot of deaths, but a lot of talking too, which puts the flick at almost two hours of running time total. We also have all the three B’s accounted for, especially the first one, as evidenced below.

This one has limb choppings, head squishings, axe attacks, garbonza slicing, there’s a chainsaw dismemberment of a bootleg Tyler Perry DVD dealer (work on the exposure in those night scenes, though, David) and some slice-of-life Orange County, Virginia, scenes with a few witty one-liners and about 12 kilotons of F-bombs. But, as mentioned, some of the talking scenes could have been trimmed, especially as Jackson and Kara take refuge in their safe house that ends up being not-so-safe after all.

The Piedmont’s version of Leatherface and her sis get two stars in this outing. Check it out.

Return of the Slasher Nurse is available streaming on Amazon or you can acquire the DVD or BluRay directly from Slasher 15 on their website.