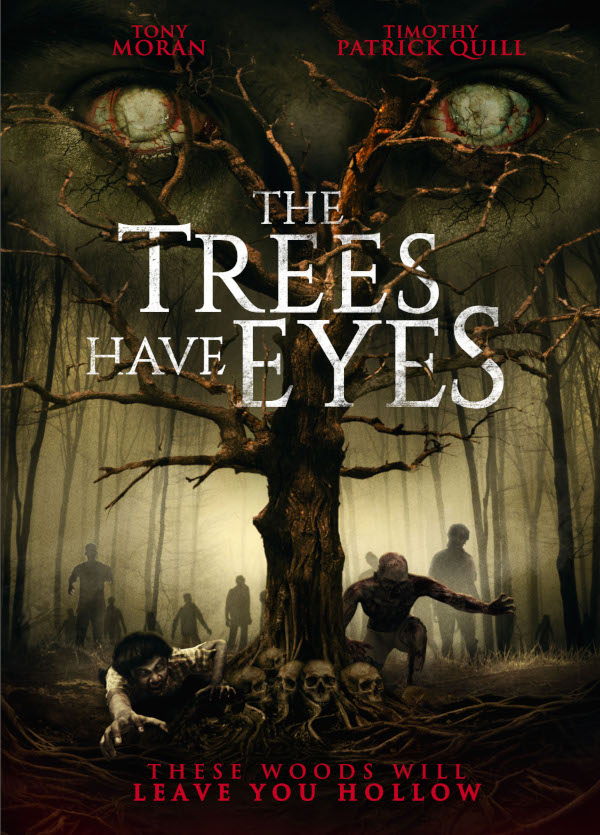 Ben Nagy reviews ‘The Trees Have Eyes’: Frolicking in the Forest and a Zombie Jubilee

What do you get when four interchangeable alpha-male types (some with facial hair) and one woman who work as bail bondspeople go into the woods?

With a title like The Trees Have Eyes, you’d figure that it’d be more like Wrong Turn or, you know, The Hills Have Eyes with a bunch of hulking redneck mutants lurking in the branches and firing crossbow bolts through people’s gizzards, then boiling their skulls and making artisanal soap that they sell out of a one-room shack with a tin roof before hilarity ensues. Maybe we will get to one of those type of flicks this month.

But nope, this flick isn’t it, because the original (and much more appropriate) title for the flick was actually Dead Bond and it reflects the fact that this is a loose reverse retelling of the first two Romero zombie flicks except it’s set in the woods.

If you haven’t guessed, this month’s theme is Woods flicks, which beat out Kung Fu flicks which had a very surprising showing in our highly scientific and painstakingly collated poll among Joe Bob’s Facebook commenters of what I should watch in November. So since I couldn’t find enough Bigfoot flicks in my movie stash to do a whole month — that’s not to say the beast’s not going to make an appearance this month — we’re going into the woods deciduously and deliberately to see what perils lurk therein.

(And you folks who voted for Kung Fu flicks, fear not. I’ll introduce another themed month next year JUST FOR YOU.)

So anyway, in this flick, directed by Jordan Pacheco (with writing contributions by him and two other folks), the aforementioned bail bondspeople are looking for a guy out in the woods. He’s got a big enough bounty on him because it’s worth getting split five ways, so he must have done something really bad, but not so bad that he couldn’t get out on bond.

There’s a lot of alpha male flexing and stuff to open. One guy (played by Tony Moran, who was the unmasked Michael in the 1978 Halloween) is named after the lizard bounty hunter in the Empire Strikes Back. However, it’s not spelled the same because, you know, potential licensing infringement, and he says “There’s no bigger thrill than hunting a human” while they’re tromping around the forest.

But before we get even deeper into the thicket here, let’s set up the guidelines for Woods flicks:

To fulfill all the camping-related elements mentioned, there are two guys and five girls camping. They got a campfire going and have about three tents pitched. Teagan finds a pond, shows her garbonzas and goes skinny dipping in the dark. Sam (Jackie B. Fabian) is the insecure girlfriend of Randall (Alexander Gauthier). Madison went camping in her cheerleader outfit and she tries to steal Randall. Randall leaves Sam in their tent and goes along with it. Holly and Brandy are girlfriends. Tucker wears a flannel.

Meanwhile, the bondspeople find the guy for whom they were searching and so now they say the F-word every other line to signify the intensity of the situation.

Then zombies show up.

Then people get attacked, eaten and turned. The woman bounty hunter Hannah (Cate Carson) gets a bite on her thumb, so she does the slow turn thing. On the camper side, Teagan gets her garbonza eaten and her guts munched on. Brandy takes her top off and she gets eaten.

After the initial zombie attack, the next 10 minutes of the flick then consists of the non-zombies in the woods doing some dialogue variant of “What the f—- is going on?”

Then, about 56 minutes in, the flick turns into a NOTLD remake with the woods survivors finding a house with three people hiding in it. They have a working truck and should be able to get away, but the guy who’s driving it screws it up and randomly drives it into some rocks off screen. So then they all split up and go back off into the woods for some reason to get to a relief area instead of sticking together. The geography, mirroring the rationality of the characters, is murky at best. That does not mean that there isn’t enough for:

Best actors: Good shuffling and moaning on the part of pretty much all the zombies, and shoutout to the 11-person effects crew who put together some good zombie gore scenes.

Best display of UFC talents: Henry, played by the late Timothy Patrick Quill (he was the blacksmith in Army of Darkness who said “I’ll stand with ya” after Ash gives his “Who’s with me?” speech), sees his son bitten by a zombie, mounts it while it’s on the ground and punches it while screaming the F-word every time he lands a punch. So 7 F-bombs.

Best burn: Henry’s not too pleased with Colt (David Michael Carpenter) after he shoots his zombified son — “You shot your best friend. You shot my son. You don’t get to be sorry.”

Best sacrifice: Ranger Murphy pushes a sedan all by himself so it could be “pop-started” while a bunch of zombies are chasing him so others may live.

Best suicide: A random National Guard guy runs into the middle of a crowd of zombies and gets eaten, blowing the cover of two women taking refuge nearby.

Best breakup: Randall gets to his Honda, locks Sam out and drives off, leaving her in the woods with the zombies.

It has blood, breasts and beasts and normally that’d be an automatic two-star rating, but the characterization of pretty much all the folks who end up being zombie meat falls pretty flat and static overall, bringing down its overall grade to just a single star.

Check it out on TubiTV or it’s also available on physical media.