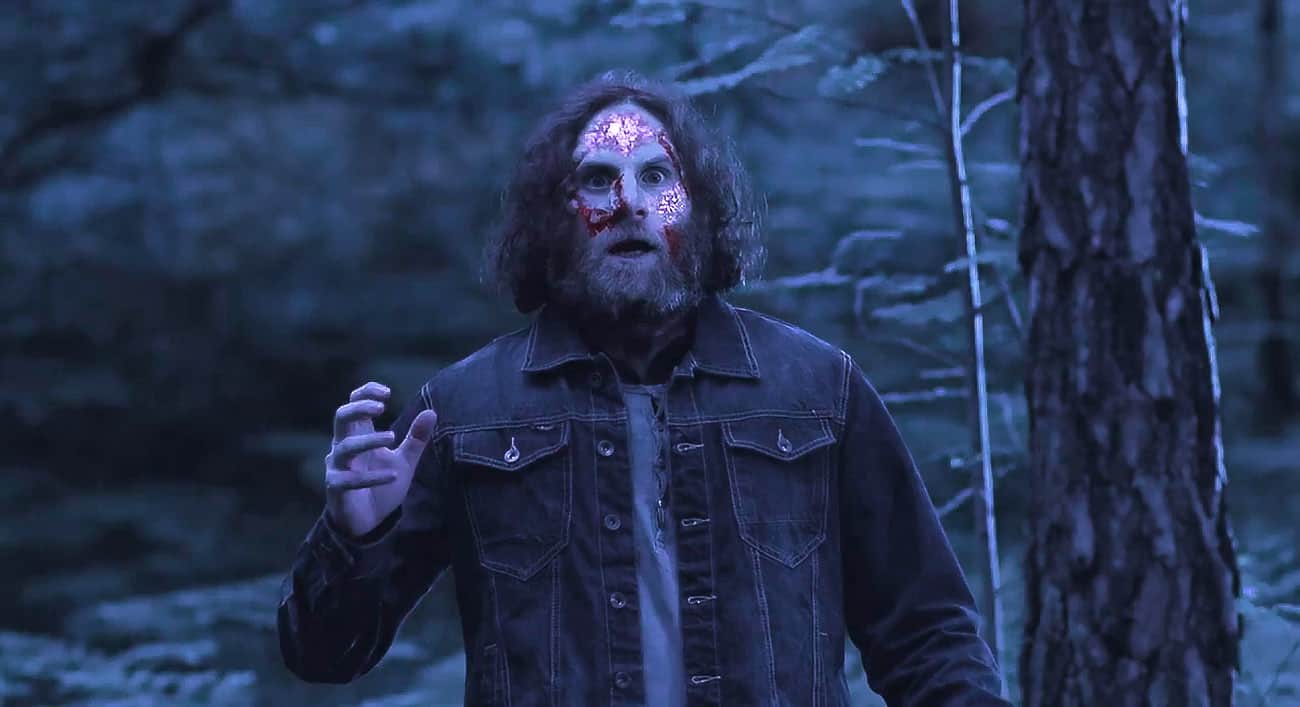 A group of four accented Euro antenna repair folks traipse out into the wilderness in a van on an assignment to fix some sort of messed-up satellite repeater device in an unidentified location in Landing Lake.

If you like long walks in the woods, men from around the United Kingdom shouting profanity in various accents and are lookin for a reason to storm Area 51, this is an instant classic.

But, and I’m noticing this in the first three flicks I’ve reviewed here for Joe Bob’s website (an admittedly small sample size), the filmmakers use that non-linear narrative trick. This happens in Landing Lake, especially toward the end, and there are some weak points in the editing that may or may not have been intentional. There’s a time distortion element going on because of the space aliens involved that I know was intentional, but this whole first scene about a woman complaining about the quality of the coffee she was served coulda been lopped off to get us a bit closer to some action.

That, and there’s a lot of stumbling around in the woods. The actors got their steps in as they traversed Landing Lake. The acrimonious quartet is led by Georgie (she of the crummy coffee who has “nightmares”) who is accompanied by chain-smoking Ann, brogue-accented hat-wearer Mike, and Chuck Taylor-wearing, backwards-ball cap-wearing, boom box-toting Phil. The crew drives out into the woods and bicker over how to fix the repeater on this phone pylon and while they’re doin that, they see a plane go down.

They argue about whether to go investigate and eventually decide to check it out.

So they walk a ways to the crash site over a ridge for an undetermined time and find the wreckage. Therein are a dead pilot, a guy whose wrist was injured (Matt), a woman who has a broken shinbone sticking out of her leg but is laughing about it (Alexandra – Alex for short) and a guy who has Tom Baker (1970s Doctor Who reference, yo) hair, looks like “The Shining”-era Jack Nicholson and is too much of a bastard to be injured by something as minor as a plane crash. His name is Jack. The pilot is dead due to a lack of durability since everybody else shakes off the effects of the crash and no name is given as testament to his weakness. Jack helpfully informs everyone that the pilot “was an imbecile that got us into this mess, as far as I’m concerned, the dogs can have him.”

The four repair folks try to assist the injured victims. They wait for rescue. Mike fights Jack and then walks off. They camp. They don’t have s’mores. They walk around looking for Mike. They don’t go to the van. Then they decide to walk to the van. It takes two days for them to decide all this when it only took (maybe) two hours to walk from the van to the crash site. Georgie experiences some time glitches, hallucinations and other disorienting experiences. The crash victims find out that their wounds have healed abnormally fast. Time has no meaning.

Then, in their walk back to the van, which they could have started two campfires ago, they get themselves the “Under the Dome” treatment (copyright Big Steve, 2009) courtesy of something mysterious in the lake that turns people into glopola. Who will get the slime treatment and what will be left of them?

Gonna give it two stars because, as I said earlier, just about all the cool stuff gets backloaded before anybody can die at any time, and there’s just a little too much chronological jumping around all because of a busted-up flying saucer. However, the glopola scenes kinda cancel out its weaknesses once you get to em.