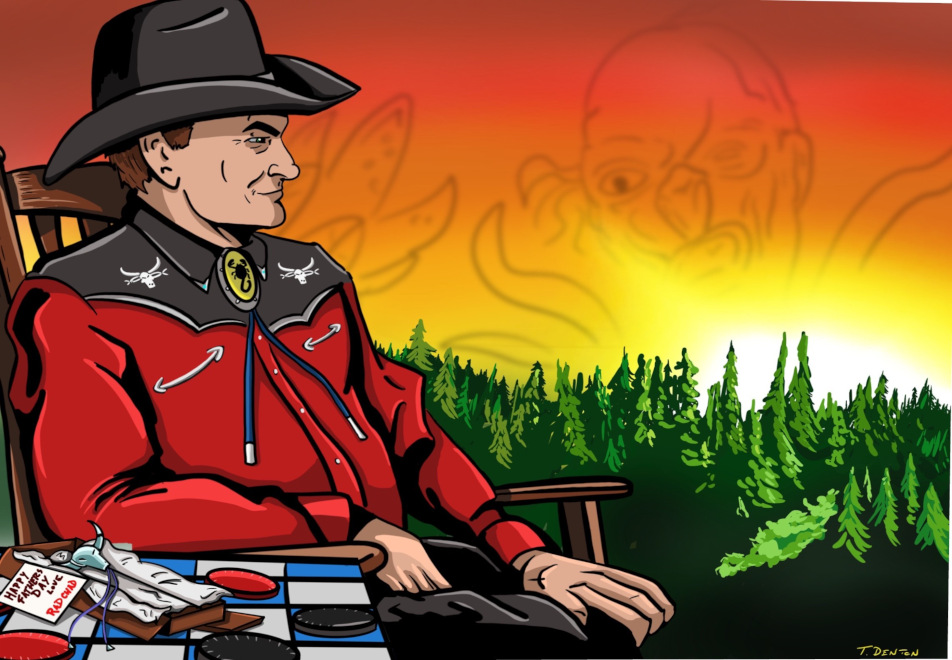 Sorry for the absence of a Last Call blog post last week. Very few words could do justice to the experience of Arrested Development Week when we got to see one of Big Steve King’s Top Five faves (circa 1984) and the, um, unique experience that was The Baby. I’d be slacking in my duties as a recapper if I didn’t at least exert a few keystrokes on the transcendent experience of two Fridays ago where unhinged mommy figures had their hands firmly in places where they shouldn’t have been under normal parental circumstances and Jason Bateman was nowhere to be found. (It’d be a terrible mistake to mention arrested development without mentioning Arrested Development.)

So here’s the art T.J. did again for all those who may have missed it.

And here are the totals for the really poorly titled first feature in Week 7 that went by the inept initial title Night Warning (the version that Joe Bob’s close personal friend Big Steve saw) and the even more inept and super wordy Butcher, Baker Nightmare Maker:

A four-star flick (Joe Bob was sort of incredulous at the time when Big Steve mentioned it was in his Top Five Drive-In flicks, but maybe the version he saw didn’t have the head smooshing), it reminded us of the importance of proper brake maintenance, that Susan Tyrrell can act her you-know-what-off and that even a seasoned professional like Darcy can only take so many comments by Joe Bob about rubbing in a tub before even she reaches her limit.

Now, the second flick — The Baby — has to be one of the most off-the-wall, queasy experiences shown in the four seasons that we’ve been hanging out on Friday nights at Shudder on The Last Drive-In. Also earning a four-star rating, you can’t get much weirder than a grown dude getting suckled by his babysitter AND aardvarking his stepsister. And, let it be known, THEY REHEARSED THIS STUFF. Made years before Uncle Lloyd’s Troma was around, which these days would be the expected outlet of flicks featuring big men in diapers, here are those totals:

And Joe Bob’s thoughts on the term “elevated horror” has to be documented for the record. His prime (and very literal) examples include:

And as for all the other folks who use the term to mean something other than scary stuff happening way above the planet’s surface (or heck, movies where Yeti rip apart people in the Himalayas and Leslie Nielsen goes crazy because of the hole in the ozone and so he takes his shirt off and fights a bear), it’s just a way for them to embrace horror flicks when they don’t really like horror as a genre and are afraid to admit that they like a horror flick.

Now that I’ve gotten the older stuff out of the way, Week 8’s two features fit in nicely as a follow-up to the prior week’s theme of arrested development via a maniacal motherly figure. For the two features, we get two psycho dads — Terry O’Quinn and a pre-Loomis Donald Pleasence — as they chew up scenery and create human-salad hybrids in The Stepfather and The Freakmaker (aka The Mutations). What better way to celebrate Father’s Day, which, while it didn’t save Nixon’s hiney, did ignite a boon for the manufacturers of grills and grilling paraphernalia that will likely persist until the fall of humanity.

And while JB had a pretty nice rant going about the history of Mother’s Day vs. Father’s Day, we also were treated to a great performance by O’Quinn in a flick that served as a kind of prototype for the sundry Lifetime Network suspense flicks to follow in the 1990s and beyond and was based on the real-life murder case of John List to boot.

Throw in She Who Dumped Brad Pitt in Budapest, an ex-Charlie’s Angel (one of the replacement ones) and a digression about how paperboys always got ripped off, we have three stars, a new fear of guys whistling “Camptown Races” and these totals which, as many folks online noted, may have egregiously omitted a whangdoodle sighting:

To close out the night, we had The Freakmaker, a star-studded British flick that practically nobody had seen featuring a bunch of household names like the previously mentioned Pleasence and a pre-Doctor Who Tom Baker done by the legendary Jack Cardiff, who had a lengthy career in show biz in front and especially behind the camera.

The flick was a box-office disaster upon release, partially because of its use of real-life “freaks” and because it sat on a shelf for so long that the marquee names weren’t so marquee anymore. To note, the biggest star (Baker) was starring in a show targeted at kids and spent the whole flick in Eckrich kielbasa makeup, so British parents weren’t gonna take em to see it. In the U.S., Doctor Who hadn’t been picked up yet by PBS, many of the other stars had faded from the public consciousness (or were never in it to begin with) and Pleasence was primarily known as being a Bond villain. Not exactly the recipe for drive-in superiority at the time.

And that’s a shame, because there’s some interesting effects work, solid performances, plenty to look at and two sequences that can be mistaken for Benny Hill and Doctor Who segments on the darkest of timelines. Also, you can’t beat Donald Pleasence monologuing about carnivorous plants, which Michael Crichton just might have seen and thought, “Hey, there’s a novel about dinosaurs in here somewhere!”

Here are the totals, earning the three stars:

Thanks for bearing with me and now that we’re all caught up, let’s see what Indy Horror Night with Larry Fessenden and Charles Band brings in the second-to-last double feature of Season Four. Catch you later!