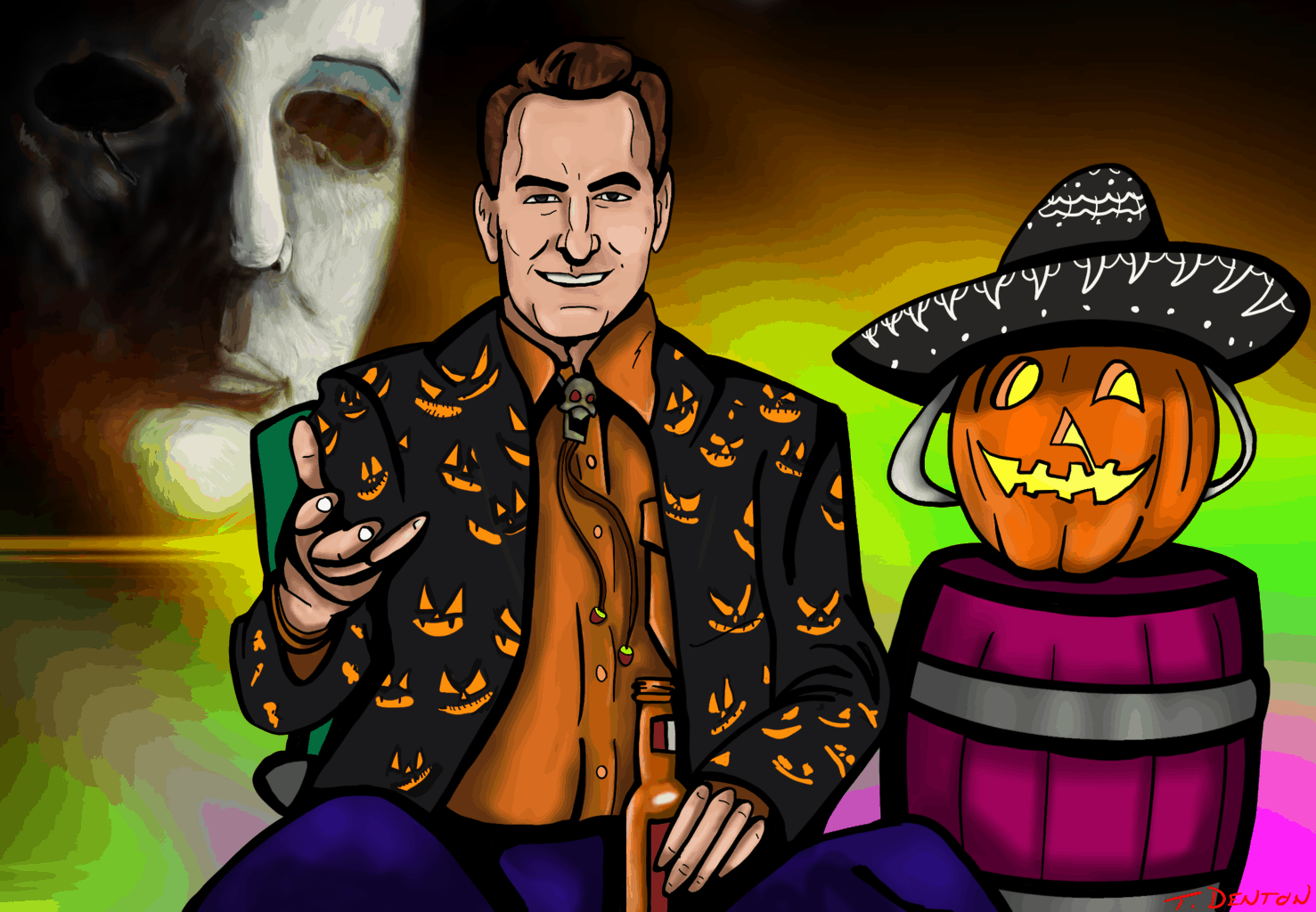 Forget why Michael’s crazy. What about Joe Bob?

Just like Friday night, installment #3 of Last Call: Hootenanny Edition means we’re hittin the home stretch. Read on for Darcy cosplay, Michael Myers berserk theories, Joe Bob berserk theories, why his rant on Dominique Othenin-Girard sounds oddly familiar, and T.J. Denton’s amazing art! All this plus our briefest of Halloween 5 recaps — ’cause Momma always said, if we can’t say anything nice, don’t say anything at all.

All Hail the Cosplay Queen

Darcy hit us with not one, not two, not three, but four costume changes for Hootenanny — from her surprisingly conservative pumpkin, gender-bending Tom Atkins, and Kelly “Cops Do It By The Book” Meeker to my personal favorite: the mid-segment, Bob-to-Laurie transformation that was as nearly dramatic as a double wig reveal on RuPaul’s Drag Race. Darcy’s cosplay and so much more adds her own brand of magic to the Joe Bob Universe, inspiring Mutants throughout the show to send in their own pics. I believe I heard Joe Bob say something about gettin those up on our Mail Girl’s own fantastic site, kinkyhorror.com.

Life is full of epic, unanswered questions: How did we get here? What’s it all mean? Did OJ really do it (just kidding). And Michael, why you so crazy bro? When we weren’t busy sending our best Boogeyman drag, we were steadily submitting our theories on what made Mikey snap. Depending on who you talk to, Michael is:

Another fave was THE Chris Jericho’s “Sister Wives” theory: Michael wanted Judith so bad, it drove him nuts. Watching her blossom in that upstairs bedroom caused a full-fledged, Flowers-in-the-Attic-style sibling sex fantasy where love inevitably turns to murder. Is that always the way?  And speaking of dysfunction…

Movie Numero-Three-O started with a perfectly peaceful mention of Hootenanny fiddle music and Martin Luther King, Jr.’s training at the Highlander Folk School (an amazing place I’ve actually visited), then BOOM! went the dynamite. Not even a Day of the Dead re-design could not calm the Joe Bob — who got so worked up about Chinese directors falling on their swords, American directors who should, and the general fuckery that is Dominique Othenin-Girard’s Halloween 5 that he ripped poor Yuki’s set to pieces — even the feminine sponges. We got your theories on why Michael went crazy. What about Joe Bob? Here’s a few to get ya started:

Or maybe — like Victor Frankenstein and other mad geniuses — sometimes you have to destroy your own creation. My theory? Method acting. The crazier Loomis got, the crazier Joe Bob got. After some perfectly calm Fancy Talk for Films 1 and 2 (the virtues of Panaglide, gratuitous Harold Pinter, the evolution of the Lifetime Original Movie, and why we need Gas Pump Girls and other uplifting stories like it in these perilous times), Joe Bob achieved Rant Level: Midnight (you’re welcome Office fans). Thank god there were no farm implements nearby.

No matter the reason, Darcy’s sweet gift from one very sweet fan and the reasons behind it helped balance the fuck out of our Last Drive-In Chi as Hootenanny drew to a close. Our Mail Girl’s struggles with depression and social anxiety are something many Mutants relate to. Her willingness to share helps us all, and I hope it helps her too — that and beating a Day of the Dead prop senseless when necessary. Because some days, to paraphrase Tom Hanks in Forrest Gump, there just aren’t enough pinatas.


Halloween 5, Or: We know you’ll pay money for another sequel so fuck you.

The longer the intervals between breaks, the worse the movie. Franchise installment Numero-Five-O still gets Four Stars because any Halloween movie is better than no Halloween movie. The Gratuitous Blogger’s Halloween 5recap includes Joe Bob’s plot questions and a few of my own:

There’s only one person to blame for this DOMINIQUE! And like The Last Drive-In set by the time Joe Bob gets done with it, he better clean this shit up.

Nigel Powers in Goldmember says: “There are only two things I can’t stand in this world. People who are intolerant of other people’s cultures…and the Dutch.” For Joe Bob, make that the Swiss. But since he still likes yodeling, cows and cheese, make that one Swiss Director in particular: Dominique Othenin-Girard. We couldn’t help remembering Joe Bob’s extended evisceration on Pierre Teilhard du Chardin while showing Exorcist II on MonsterVision. In fact roll it and hit the 3:32 mark, because there’s only two ways to end a Joe Bob recap: with a rant and a bunch of love for a bunch of Mutants. Be sure to click over to one more post for all the Mutant Shout-Outs from Friday night’s show.