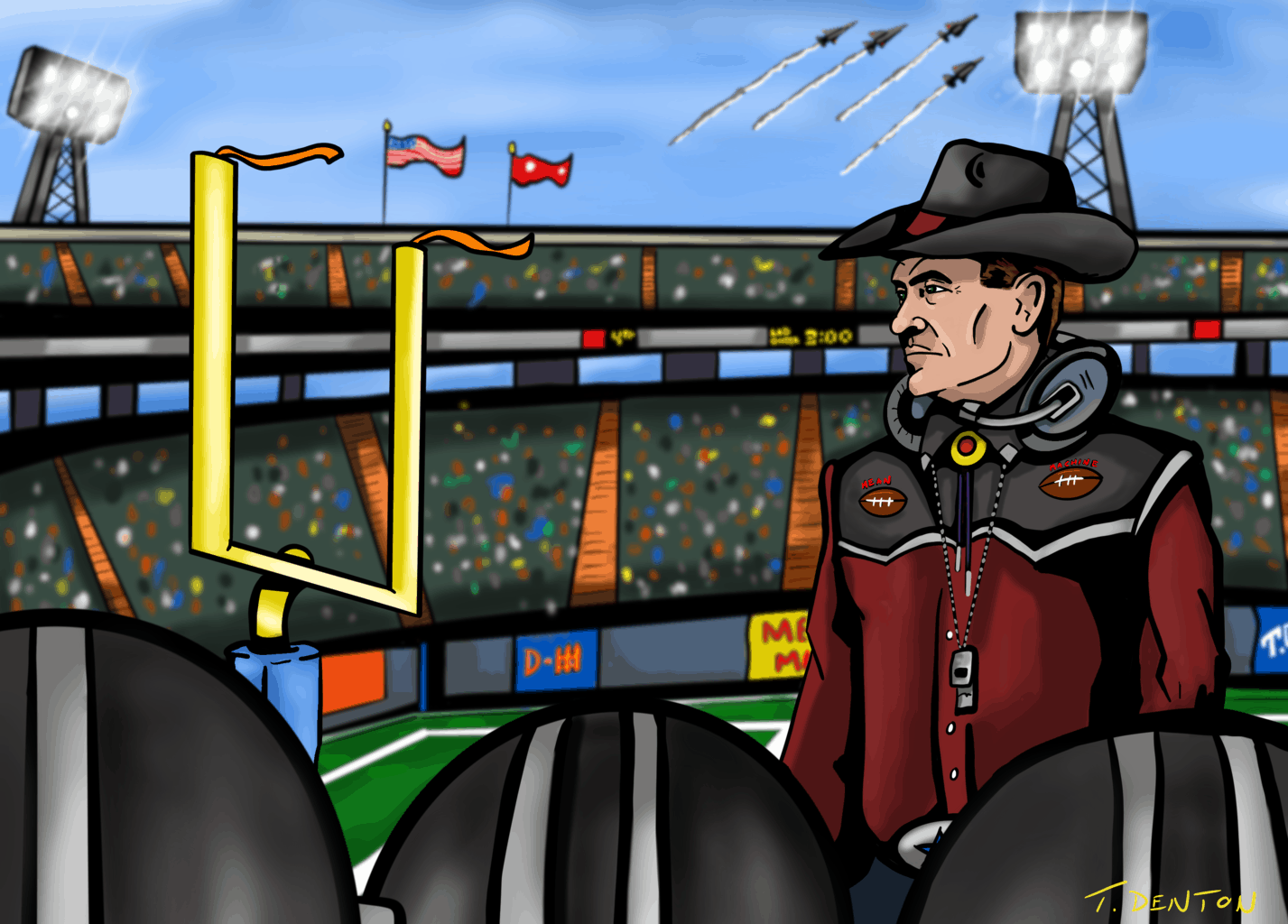 The Last Drive-In | Joe Bob and the Staten Island Mutants

Just in time for pigskin season, it's a Joe Bob football fairy tale!

To celebrate the start of pigskin season, the Gratuitous Blogger offers up a Joe Bob football fairy tale. The unmistakably awesome art of @TDenton_1138 appears as always. And remember: Even if you don’t like football or sports of any kind, pre-gaming and tailgating are permitted and encouraged.

Coach Joe Bob eyes the field – his eyes steely, narrowed to slits that blend past the corners of his eyes, pathways carved by decades in the hot Texas sun. “Glad I got my trusty turquoise bolo on for this match-up,” he thinks, taking a swig of Lone Star masquerading as Gatorade inside his Last Drive-In squeeze bottle.

His team, the Staten Island Mutants, gathers round him on the sidelines, fueled by a passion for Blood, Breasts and Beasts; their love for horror; and their devotion to their coach. Their opponents? Team Cat and Mouse (Joe Bob hates cat and mouse). Otherwise known as Monotony. Apathy. The collective forces that think the drive-in is all but dead, that communal viewing with its origins in the days of Epidaurus is a thing of the past.

This match-up is years in the making. And it all comes down to these final few seconds.

The Mutants are up by two points thanks to an end-zone turnover and safety conversion early in the fourth quarter. “We got to em,” Joe Bob tells his team. “Wore em down. Now, we just gotta hold em.” Cat and Mouse could snatch the victory with a game-winning field goal. Mere moments are left on the play clock. The Coach turns to his Special Teams captain. “Whatdya think Felissa? What’s our play?”

Felissa Rose pauses, spiked pink stilettos piercing the astroturf. It’s all up to the defense now. After a brief Angela stare into the distance, she declares: “Let’s mangle their dicks!”

Team Mutant erupts, their Coach included. “Dang, Felissa!” says Joe Bob, still chuckling. “We wanna stop their game but not stop their game, if you know what I mean and I think you do.” You need a coupla shots with Darcy at the Nasty Javelina by the lake to calm you down.

“Fuck yeah!” yells Darcy, head of the Mutant Cosplay Dance Squad, dressed up as wolves from the Seacrest Preserve. Team mascot Belial hisses from his basket on their props table. Darcy throws him a pork chop, turning back to the resident Mangled Dick Expert for her game-winning strategy.

“I think we need our secret weapon,” she says.

“You sure?” a wary Coach Joe Bob asks.

“Okay then, get him in position.”

The downfield referee blows the whistle, signaling the end of the last timeout this game will ever have. Special Teams takes the field, let by their captain Madman Marz. They’ll do whatever it takes to pull this one out for Joe Bob.

The teams take formation at the 20-yard line, Cat and Mouse’s long snapper hikes the ball, the holder secures the snap and as their kicker approaches. Suddenly and improbably above the screams of the crowd rises the singular piercing falsetto of John Brennan, rising like the high lonesome sound of a locomotive on its way to a Mariah Carey concert.

It’s all the distraction Team Mutant needs. The kicker’s gait skips a beat. His foot makes contact, launching the pigskin but watching in disbelief as it strays from its path and strikes the left side of the goalpost. The game clock strikes. Team Cat and Mouse drop their heads as the Mutants storm the field, propelled by the thrill of victory. Brennan pumps his fist on the sidelines, chest puffed, beaming brighter than his gold sequined jacket. “And they said it was too hot to wear this today.”

There’s only man who stands quiet: Coach Joe Bob, overwhelmed with pride in his team.

The on-field reporters rush in, each one eager to ask that first question. Barbara Crampton, lead reporter for the Home Chopping Network, jostles her way to the front of the pack, microphone extended as she shouts her congratulations: “HEY! Coach Joe Bob! The Bear Bryant of the Mutants! You’ve pulled out another amazing win. What are you gonna do to celebrate?!”

Coach Joe Bob’s days have been long, his nights even longer. Ready for a well-deserved break, he smiles at Barbara and yells:

Until next week Mutants…