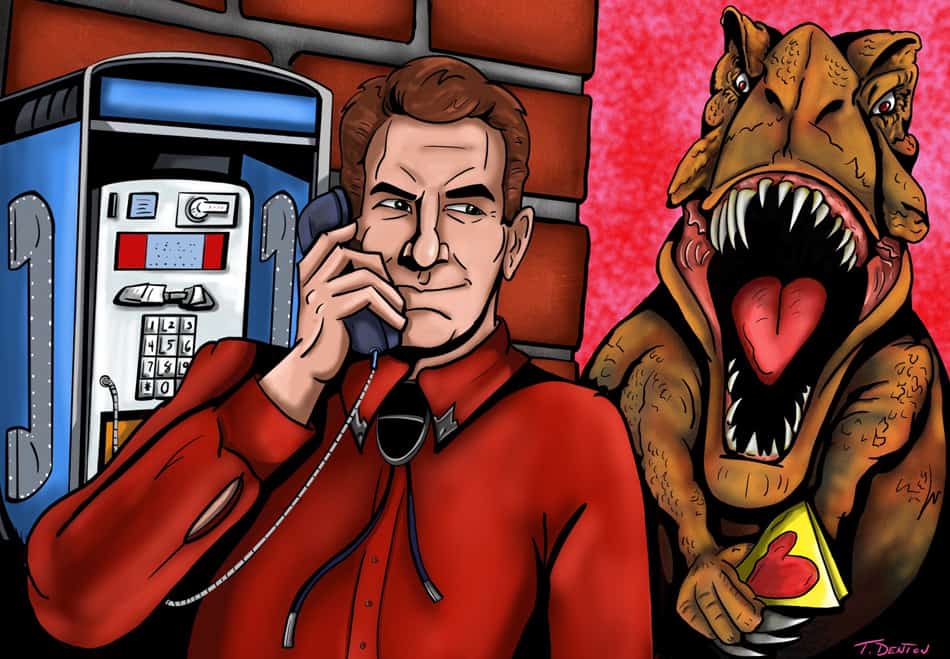 The Last Drive-In | Joe Bob Put a Spell on You: Tammy & the T.Rex

Nothing gets the juices flowing in preparation for that most-romantic of holidays more than a wildman weekend sweat-fest way out West in the desert, and Joe Bob got a little bit tribal in prepping for putting a spell on us.

Those weekends aren’t for the faint or weak of heart, involve profuse sweating, copious crying, more sweating, the ripping off of shirts, yelling, beating drums and those two essentials: separating from your mother and the initiation into manhood, which usually involves the handling of a firm stick of considerable heft.

But sometimes, just sometimes, even a paragon of manliness such as the world’s greatest drive-in host, Mr. Briggs hisownself needs a touch of help in the form of elixirs intended to weave a web of wooing wonder. Two examples of such as seen below.

And, yes, even though these concoctions did not work as intended by user — there’s something to be said for having a hippie guru handy to ensure the mix is just right – the table was set for a future foray into the mysteries of romance.

By the way, there was a four-star movie too, which is Exhibit A of what happens when the distributors go hog wild on the gore when putting a movie out in Brazil but skimp on the proofreaders: Tammy and the T.Rex or Tanny and the Teenage T.Rex.

You know, normally the closest dating your run-of-the-mill T.Rex is associated with these days is the carbon kind, but goldang it, when you take Paul Walker’s brain out of his croptop-wearing body and have the creepy leader kid from Children of the Corn help Bernie from Weekend at Bernie’s stick it in an animatronic dinosaur, we are talking greatest romantic comedy involving a reptile since probably ever.

A lovely movie with vengeance, Denise Richards, teen love, the most expressive gay sidekick ever, the debut of the testicular claw years before the WWE Attitude Era, funky T.Rex limb geometry, a scene where an extinct dinosaur and nearly extinct technology (a pay phone) co-exist and even a surprising cameo from the versatile Efren Ramirez (Pedro from Napoleon Dynamite).

And then you get to these

And hey — believe it or not, yours truly had an assist in the breaking news of the night.

After hearing the rumor that Tammy’s T.Rex was taken to “some amusement park in Texas,” I did some Newspaper Archival Fu trying to figure out where it could have gone. One thing led to another, and I found a YouTube video from about 10 years ago of a familiar-looking animatronic T.Rex that had landed at the Ripley’s Museum in Grand Prairie, Texas. I even counted the teeth in publicity photos and looked at the minuscule contours of the head wrinkles just to be sure. This is important stuff.

We’re not sure where it is now – presumably Ripley’s still has it. There’s a later video on YouTube (subtitled “inaccurate animatronic Tyrannosaurus”) showing Michael’s host – our favorite T.Rex — across the pond in London. Where he is now is anybody’s guess. You’ll have to do some Outreach Fu to Ripley’s to figure out if he’s still hanging out in Doctor Who Land. But let’s all raise our tiny three-clawed T.Rex arms and hope that the parts are still available to keep Denise Richards’ favorite reptile co-star mechanically jerking its head, lifting its upper lip and roaring for years to come.

Speaking of going out on a roaring conclusion, that end with Tammy/Tanny dressing up in a little number and doing a number on Paul Walker’s disembodied brain-in-a-jar was a great precursor to the kinky Technicolor odyssey into the perverse that was to follow in The Love Witch. Click through to see the witchy way to a man’s gazebos courtesy of Madame Laura…