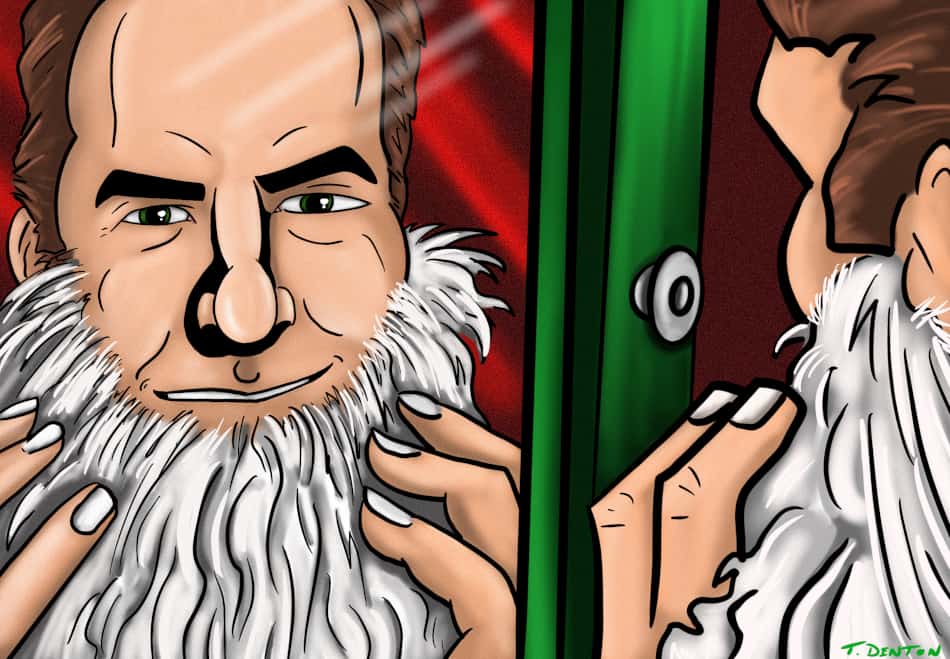 Be nice or we'll bring you something horrible...

Dang ya’ll are generous. The only thing better than a Job Bob Christmas special is The Last Drive-In Home Shopping Christmas Network — and art by the amazing T.J. Denton of course (@TDenton_1138).

We hope you buckled up for Christmas Evil, or as it’s called in its uncut Region 5 Ukrainian release as Santa, Portrait of a Serial Killer.

There are exactly one jillion movies listed on IMDB with “evil” in the title. There’s Evil Dead, Touch of Evil and See No Evil, Hear No Evil (a Richard Pryor-Gene Wilder joint). There’s Tucker and Dale Vs. Evil, New Year’s Evil (watch party anyone?) and Evil Under the Sun (an Agatha Christie joint). There’s also Two Evil Eyes, the lesser-known Dario Argento joint with George Romero. But last Friday, there was only one such movie that mattered: Christmas Evil, episode numero-two-o on Joe Bob Saves Christmas. And Joe Bob and Darcy hosted the hell out of it.

Christmas Evil is the sensitive story of Harry — a Willy Loman-esque man with a Santa complex who can’t decide if he wants to be naughty or nice. The film opens innocently enough on Christmas Eve in 1940s America, but this time the Red Ryder BB guns are replaced by a man in red who WILL gouge your eye out (take that Jersey proto-yuppies!). On that fateful night, young Harry sees mommy letting Santa steal second base, if you know what I mean and I think you do.

This strange mix of coitus and Christmas puts a simmering pot of pumpkin-spice-scented resentment on Harry’s stove top that boils for 40 years until something snaps. Harry unravels, increasingly distant from his family and reality until he finds his purpose: giddily gluing on fake whiskers (a/k/a just another Tuesday night in the underground fake beard fetish community) and transforming into Saint Nick himself.

Harry has found “the right notes,” the tune everyone dances to, and none of us will ever hear Santa Claus is Coming To Town the same way again. Harry’s Santa comes with a morality clause, delivering gifts out the back of his serial killer panel van with a heaping helping of Christmas justice. Along the way are moms in desperate need of parental counseling, a redneck Nutcracker brigade complete with Rebel flag, and a naughty boy named Moss Garcia who not only picks his nose and crosses against the light but has negative body hygiene and reads Penthouse.

All this yule-ish goodness comes from the mind of writer-director Lewis Jackson who, like Brian De Palma and David Cronenberg, left med school to make movies. Christmas Evil was his one and only non-porn feature. Healthcare lost a practitioner but we gained a cult-film auteur with a decidedly wicked bedside manner. Like so many genre films that don’t fit neatly in their boxes, Jackson’s movie bombed until John Waters made it the inevitable cult classic.

So clearly, Christmas Evil is fantastic and one of the few drive-in flicks to earn a coveted 4-star rating while featuring exactly zero breasts.

The only thing that made the night better was Joe Bob and Darcy’s exploration of the true meaning of Christmas, including peace, love, joy, sick-o sugar cookies, the Hiney Chakra, and everyone’s favorite holiday wish: Just Shut the Fuck Up. And while we mutants normally like our holiday joy served with a side of marshmallow-topped desperation, Friday night was pure magic. We got mutant messages throughout the night from Chris Jericho, Kelly Maroney, Felissa Rose, Svengoolie, THE Tom Savini and so many others including last season’s Silver Bolo Award winners. We got stunning revelations (gasp! Joe Bob doesn’t bake). We got a new Silver Bolo Award winner (congrats @GeeksWhoEat). And thanks to the Last Drive-In Home Shopping Christmas Network and some amazingly generous mutants, more than $25,000 at last count has been raised for charities that prevent self harm, donkey harm, lady harm and autism harm.

In all seriousness, keep bidding over the next few days. We promise you you’ll feel all warm and fuzzy. If you’re not able to pay eight grand for Darcy’s Demoni mask, please make any kind of donation to one or all of these wonderful organizations. And be sure to tell em Joe Bob sent ya:

Merry Merry ye mutants and a Happy New Year! Thank you for this amazing community. And if you haven’t already, check out Sir Ben Nagy’s take on Dial Code Santa. Because mullet-sporting French kids are way cooler than you think.