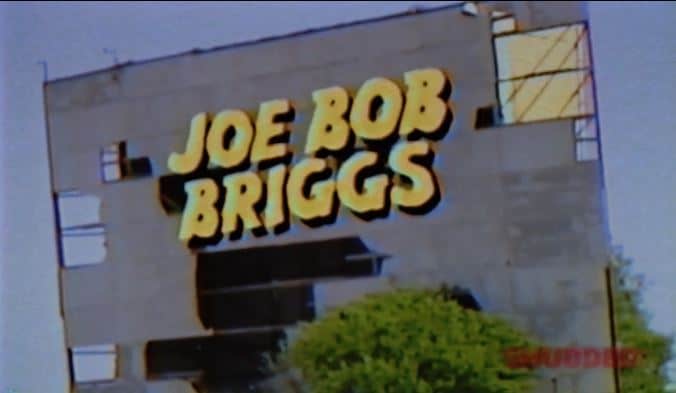 Take out your notebooks. We’re gonna go over this ONE TIME and ONE TIME ONLY...

All Demons, All the Time, and Our First Spaghetti Slasher

A brief introduction from Your Gratuitous Blogger before we get to the Joe Bob good stuff….

Démoni! In the 947th hour of his faux-well tour, our drive-in dreams came true: Joe Bob did Argento. Well almost. While far from mirroring the film’s interchangeable characters, Demons proves it takes a lot more Eye-Talians – Bava! Sacchetti! Ferrini! Barberini! Simonetti! – to make a cheesy horror flick than it takes to make a good one. Demons would be the first of two spaghetti slashers in the marathon and our drive-in introduction to their recurring themes:

“Take out your notebooks. We’re gonna go over this ONE TIME and ONE TIME ONLY. Demons was originally supposed to be part of a trilogy. Demons, Demons 2 and Demons 3. Demons 2 was basically the same as Demons 1 with some grosser zombie effects, and those were both directed by Lamberto Bava. But Demons 3 was supposed to be based on a story by M.R. James called The Church. So by the time Michele Soavi directed Demons 3, he decided he didn’t want to be associated with Demons 1 or Demons 2 even though, as I pointed out earlier, he’s the actor who plays the man with the silver face mask — actually he has two roles in Demons 1, he’s also Jerry in the black-and-white film-within-the-film. So Soavi decides his movie is better than Demons Uno and Two-o and so he changes his title back to The Church.

“Now they don’t have a Demons 3. So Lamberto Bava is making another movie — we’re up to 1988 now — called The Ogre. It was made for a TV series in Italy and then recut to play as a feature film outside of Italy, and it had nothing to do with Demons, but they released it as Demons 3: The Ogre. Except in the countries where nobody wanted The Ogre, and so in THOSE countries there was a movie by Umberto Lenzi called Black Demons that was released as Demons 3.

“Let me review. We’re now up to Demons 3 in the series and we have five movies, only two of which have anything to do with Demons.

“Next, for no reason anyone can figure out, a Michele Soavi movie called The Sect is released as Demons 4. Apparently Michele had changed his views after seeing the box office returns on a horror movie entitled THE CHURCH.

“I’m not finished. Lamberto Bava now remakes the most famous movie of his father Mario Bava — Black Sunday — and it’s called The Devil’s Veil, only at the last minute he goes, ‘Screw that,’ and releases it as Demons 5. Which brings us to 1989 when Luigi Cozzi made The Black Cat with Urbano Barberini but decided, hey, everyone else is doing it, I’ve got Urbano Barberini, they don’t — DEMONS FRICKING SIX. Then Cozzi goes out and does interviews and says that Demons 6: De Profundis is actually the third film in Dario Argento’s trilogy that started with Suspiria and Inferno, which made even less sense because that trilogy — called the Three Mothers series — existed only in Dario’s head.

“By the way, Demons was made for $1.8 million, but it made such a huge pile of money that Bava and Argento IMMEDIATELY filmed the sequel, using many of the actors who were killed in the first one, and that film came out so fast that it played in Germany before the FIRST Demons had played there. Therefore, in Germany and Germany alone, which is where the story supposedly takes place, this Demons that we’re watching is actually Demons 2, and the movie we think of as Demons 2 is Demons.

“You probably think I’m finished now. That would be a mistake on your part.

“In 1994, Michele Soavi makes probably his best film, Cemetery Man. Why are we talking about that? Because it appeared on DVD as . . . Demons 95.

No, Joe Bob, we wouldn’t know anything about that. If that and a cup of pine tar espresso didn’t get you through the home stretch, nothing will.

Tear in Your Beer Moment: Mario Bava calling in sick so his son Lamberto could take the helm. Joe Bob’s mention of World of Horror, a fantastic documentary and the Gratuitous Blogger’s personal introduction to all things Argento. I don’t know where I’d be without my maestros – the one from Italy or the one from Grapevine, Texas.

Rating: 4 Balls. And the Tall Man Goes To: Every filmmaker in Italy, Darcy’s cosplay

First Marathon Mention of a Recurring Joe Bob Theme: Plot getting in the way of the story

EPISODE BONUS: Unrealistic use of Go West to capture the cavorting razor-blade lifestyle of a bunch of punk-rock cokeheads

Not-At-All-Official Last-Drive-In Anniversary Bracket Results: Lost in Round 1 to Re-Animator