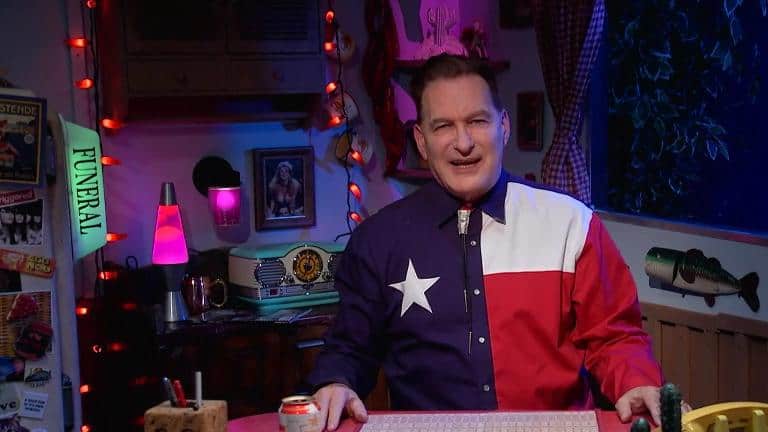 Only one thing could make Joe Bob pre-announce a drive-in flick.For this week’s Drive-In Oath, please remove your Stetsons and observe a moment of silence for one of the greats, Mr. Larry Cohen.

It’s the last time we’ll be sad about it.

“Information font or fount? Either way, I spew it out!” – Joe Bob Briggs

Joe Bob’s encyclopedic insight knows no bounds. He rightly notes that Q the Winged Serpent is part horror, part monster movie, part police procedural, and 1,000% awesome. Other dishes in this kitchen sink include Aztec cult worship, multiple blood sacrifices, and a resurrected serpent god named Quetzalcoatl (hipster name Q) who turns the rooftops of New York into her own private punch bowl and salad bar. Q’s fate collides with Jimmy Quinn, a two-bit grifter who discovers her lair. While the cops, the mob, and the cult chase Jimmy, Jimmy chases a deal. He cashes in on the carnage by turning Q into a flying goldmine – leading cops to the Chrysler building where they pop a cap in the murderous serpent and her little baby, too.

The city thanks Jimmy by voiding his million-dollar deal. Fortunately, things get worse. His girlfriend kicks him out and he’s forced to defend himself from one last hater (the Aztec cult leader). Saved in the end by New York’s finest, Jimmy proclaims: I’m not afraid anymore. But his king-of-the-world moment is short-lived as the camera once again takes flight and closes in on … another guld ‘durn egg.

A Drive-In Kind of Guy

Lawrence George Cohen was his own Cohen brother – talented and original. Because he was, Q delivers the total package. Perspective and pacing. Great backdrops and performances. Air, light and rhythm.

Cinematography. Q is an aerial Jaws. Her ghostly skyscraper shadow and the shoot-out as the film nears its climax are phenomenal. It’s good news for us, bad news for the bikini-clad roof loungers who get scooped up, thrashed and eaten. No interspecies romance subplot. No Faye Wray. No trips to Skull Island.

Pacing. Story flow can make or break a film. We’re so used to jump cuts, we forget how movies used to move. Larry’s camera puts us on Tulsa Time even as we’re on the edge of our seats.

We heart NY. Q gives us New York’s gritty side – in other words every side, save for crown jewels like the Chrysler Building. Larry makes love to the Chrysler the entire film. It’s his muse. His temple. You’d never know he nearly burned it down.

Dialogue for the ages. Here’s a sampler:

• Joan: The next time you hurt me, I’ll break a lamp over your head while you’re asleep!
• The Cops: Shepard: Hey, what are you looking for? Powell: Looking for the head. Shepard: Won’t be much left of it. You ever drop a cantaloupe from 40 stories?
• The Professor: What else is God but an invisible force that we fear?
• Jimmy Quinn: I stink and I just wanna cry.

Speaking of Twitter, Put out an APB
Darcy the Mail Girl (a/k/a @kinky_horror a/k/a Diana Prince) is a suspected Russian bot. Armed with a smoking smartphone and may be in disguise. Last seen in a blonde wig and booty shorts wielding an axe.

Joe Bob: Well good luck at betraying this show
Darcy: I can do both.
Joe Bob: And betraying the New England Patriots, cause aren’t you a big Tom Brady fan?
Darcy: I go both ways.