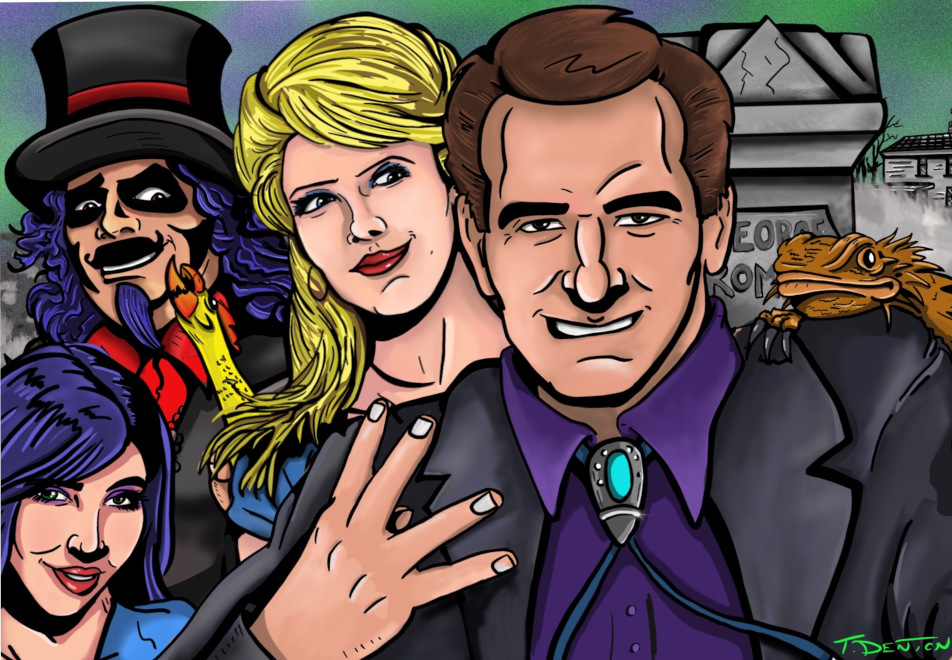 Like that human-sized cicada from The Beast Within or the grown dude that emerges very painfully from that prone lady in Xtro, we emerged from our Last Drive-in offseason dormancy, and lo and behold, lookie here, we find out that it’s been 100 flicks (give or take because math in Grapevine is different than other places) shown by Joe Bob, Darcy and the rest of the crew on Shudder.

And what better way to get a season rolling by revisiting the hoary, gory (for its time), public-domain, genre-changing four-star 1968 George Romero zombie flick that captured the zeitgeist, roasted it over a flaming pickup truck and has chowed down on audience’s fears, expectations and interpretations for more than half a flipping century?

As Joe Bob readily admitted, it’s very difficult to say something new about Night of the Living Dead because, oh, just about every horror host, wannabe horror host and their pet bearded dragon have seen it thanks to the late-stage title change when they were getting ready to release it in ’68 and the ensuing copyright snafu that unleashed, much like a pack of ravenous decaying ghouls, the hordes of film distributors, TV programmers, video tape companies, DVD manufacturers and streamers to show the flick whenever and however they wanted.

So what San Francisco Creature Features host Bob Wilkins started pretty much right after the flick came out, even as it was still playing as a midnight movie at theaters and at drive-ins through the late 1960s, 1970s and even into the 1980s, well, you knew The Last Drive-In would need to continue that.

But for this very special century celebration, it wasn’t enough to learn about the connection between Calgon and cannibal ghouls, Mr. Rogers and George Romero and also have a bin filled with a metric ton of VHS releases of NOTLD, all with the same (we think) Drive-In Totals.

Nope. In addition to all of the above, that which T.J. Denton prophesied came to pass: A Svengoolie, JBB and Darcy horror-host team-up that covered such diverse topics as vaudeville bits, getting pied in the face, the care and feeding of rubber chickens, how sometimes films just have to get chopped to make room for the commercials when you’re working network and the secret history of Berwyn.

And while Mia Farrow’s sister wandered around a fake Greek isle and Eastman lurked for the vast majority of the flick waiting for people to chew on, Darcy got JBB a cake and initiated a Mail Girl handicap match situation when Honey Gregory, the Original Mail Girl from Drive-In Theater and the early episodes of MonsterVision, came back to hang out and stop Joe Bob from talking about donkey trips on Route 67.

Honey, it’s been a minute! Was great to see you again!

So the birth of a drive-in reviewer career was celebrated and a 40-year wrong was righted in Season 4, Episode Uno. (You can read the original review of The Grim Reaper on The Lost Drive-In Patreon.)

But while Joe Bob finally got to see the uncensored Anthropophagus, he never got around to looking at the next D’Amato-Eastman team-up of Absurd. Fortunately, I got you covered.

So check that out, and check you later for Season Four, Episode Two-o with some witchy doings promised.