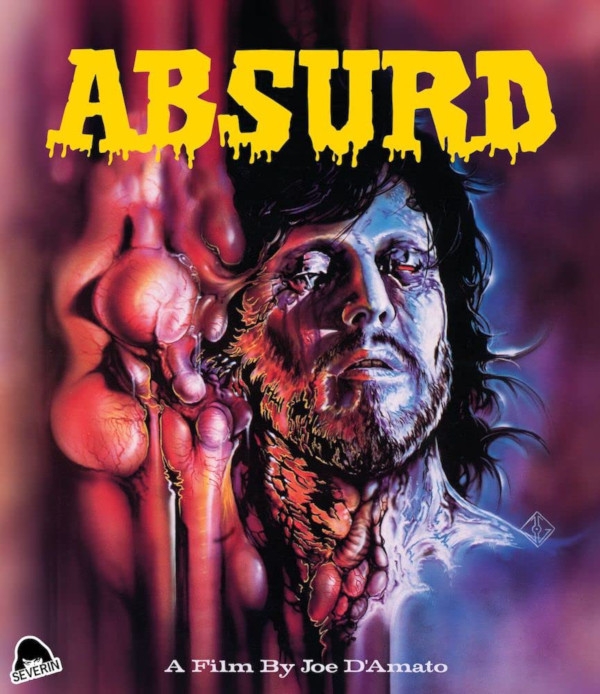 Ben Nagy reviews ‘Absurd’: 40 years ago, Joe Bob reviewed the original, but he never got around to the sequel

Two score years and four or so ex-wives ago, Joe Bob Briggs brought forth upon the city of Dallas, a new column, conceived at one of the finest drive-in theaters in Dallas or Tarrant County, and dedicated to the oath that we believe in the three B’s, will party like jungle animals and then boogie till we puke as long as one drive-in still stands on the face of this Earth.

Now to mark the monumental occasion of when, on Jan. 15, 1982, way back on Page 23 (or so) of the Dallas Slimes Herald (before you got to the ads for Discount Al’s Furniture located past Cedar Crest Boulevard and after the ads for the latest fern bar that had opened up on Commerce), Joe Bob Briggs reviewed his first flick — The Grim Reaper, aka Anthropophagus — we’re going to take care of some business that was left unfinished lo those many years ago.

(Editor’s note: If you’ve never read Joe Bob de-butt column, don’t want to shell out $100 for a copy of the first Goes to the Drive-In book and don’t know what The Grim Reaper was about, all you need to know is that it’s about a Greek cannibal sitting on an island who doesn’t like tourists OR just take a tip from your friendly neighborhood reviewer and subscribe to The Lost Drive-In Patreon so you’ll get to read it.)

Well, Eastman and D’Amato had so much fun with that one that they teamed up again for a stealth sequel a year or so later called Absurd. It might not have ever showed up at the drive-ins in the Dallas area because it never got reviewed in “Joe Bob Goes to the Drive-In,” which is an absolute shame because it is the best Italian Halloween 2-Halloween-Shining ripoff ever written to have taken place during Super Bowl XIV.

But here I am to help by filling in a long-vacant gap in the card catalogue of drive-in reviews that has persisted through three TV series, four decades, seven presidential administrations, 10 Olympiads and four-fifths of a half-century.

First thing about Absurd is that it follows Joe Bob’s Rule of Sequels that Halloween III broke, and that is that D’Amato and Eastman decided to make the EXACT same movie, but with a few differences so you know it’s a sequel. The first thing is that, rather than playing a balding stringy-haired cannibal with bad teeth and a beard sitting on a deserted Greek island like he did in Grim Reaper and killing tourists, Eastman is Niktos Thermopoulos (or something approximating what I just typed) a not-balding killer with good teeth and a beard jogging through a suburb and who almost gets killed.

Seriously, the film opens with our killer and a guy in a robe doing some light trail running — nothing to indicate that it’s really a pursuit. You’ve got some noodling/mournful Goblin-style guitar in the background, neither guy is really running with much urgency. It could actually be the Italian version of the Life of Bill Rodgers to cash in on the Chariots of Fire buzz until we get some weird cuts to a bed-ridden teen girl doing geometry homework by sketching circles with her compass, and it’s not until Niktos decides to scale a wrought-iron fence, impales himself in the abdomen and stumbles into the house while his guts are leaking out, ruining breakfast for a kid named Willie, that we have any idea that this isn’t Joe and George doing Chariots of Fire.

Before I get any further, as a side note, Willie hands down turns out to be the second most-annoyingly dubbed and acted Italian boy of all time behind He-Who-Shall-Not-Be-Named from House by the Cemetery. The new rallying cry for the Mutant Fam needs to be “[Expletive] B** and the Willie he rode in on.” In all honesty in some ways, especially toward the end of this flick, Willie actually ends up being even MORE ANNOYING than B**. It has to be seen to be believed. But since he’s only having Cheerios and Niktos is bleeding all over the front door and it’s only about three minutes into the movie and we only are exposed for about 38 seconds, we have no clue about what untapped depths of annoyance Willie shall later mine.

Niktos winds up in the hospital where he is patient A-Number-1, impressing the hell out of the medical staff there who gush on his amazing Wolverine-like healing ability while moving some deli meats around on top of his abdomen and say stuff like, “It’s absurd, completely absurd,” when referring to his super-coagulating blood and “His blood is reproducing itself at triple the normal rate,” and “I’ve never seen such an extensive cerebral mass.” While getting worked on, Niktos even is resistant to the anesthesia and wakes up a few times to make some menacing faces when the docs are putting his innards back in.

But since Eastman didn’t write any lines for himself, the guy in the robes (Edmund Purdom — the dean from Pieces) ends up being in charge of explaining the whole situation in an exposition dump to the chain-smoking cop who’s doing the investigation into the jogging outing that turned into an impalement.

You see, not only is he an extremely slow-running Greek priest, but he’s also a biochemist who did an experiment that made Niktos immortal, homicidal AND crazy and so the priest has to capture and control the monster before he goes full amok on the quiet town. Pretty Halloween-ish, no? But while fading in and out of consciousness, Niktos sees the priest, gets all fired up and motivated, makes more faces and then goes off on a murder spree after escaping the hospital.

Then it’s straight babysitters (and kids) in peril with Willie, his bedridden sister and Peggy and Emily, the two girls their parents hired, threatened by Niktos because Willie’s dad hit him with a car before he and his wife went to the neighbors to watch Pittsburgh play the El Lay Rams. They even call Niktos “The Boogeyman” eight times, lift some of Jamie Lee’s dialogue from Halloween (the first one) and re-create the door scene from The Shining, but there’s no “Here’s Johnny!” because 1. Eastman didn’t give himself any lines and 2. “Here’s Niktos!” wouldn’t have worked.

Best-Trained in the Ancient Custodial Arts: The janitor at this factory has impressive mopping technique, tries to fight Niktos and puts a few bullets in him.

Best Cameo: Michel Soavi, an actor who almost always gets killed in Italian horror flicks (City of the Living Dead, Demoni) and later director (Stage Fright, Dellamorte Dellamore), has trouble with his motorcycle, gets left behind by the rest of his biker pals, all of whom sound like Cheech & Chong, and gets hung in a tree.

Best Use of What’s at Hand: Niktos drills a nurse through the skull, bisects a dude’s head with a jigsaw and pick-axes a babysitter through the skull and that’s before he decides to chuck someone in an oven.

Best Donald Pleasence Imitation: The bioengineer priest who is responsible for the killer’s creation, much like Loomis, drives around aimlessly, says stuff like, “There is nothing human left in him,” confronts Niktos ineptly and then pretty much fails at stopping him.

Best Relearn the Rules of Football: The version I watched had Super Bowl XIV going on in the background and it’s what got the parents out of the house so the babysitters could get imperiled. Anyhow, the announcer was using some of the real players’ names and some other random, made-up names. Also, when a guy was running at the 30-yard line, the announcer was about 20 yards off, saying the guy was at the 50.

Best Nurse/Babysitter Ever: Emily (Annie Belle), in the Jamie Lee role, hoofs it through the day-shot-for-night woods, gets accosted by the town drunk, still makes it from her nurse gig to watch the kids and then gets subjected to an exposition dump from her boss, who just happens to call the house she’s babysitting at to tell her that her co-worker was just found murdered at work.

Three stars. Half-star deduction because no garbonzas, plus the existence of Willie drags it down an additional half star. However, if B** was your favorite thing about House by the Cemetery, then you’ll give it four.

Check it out streaming on TubiTV or on Filmzie or snag it on physical media from our great pals at Severin Films.