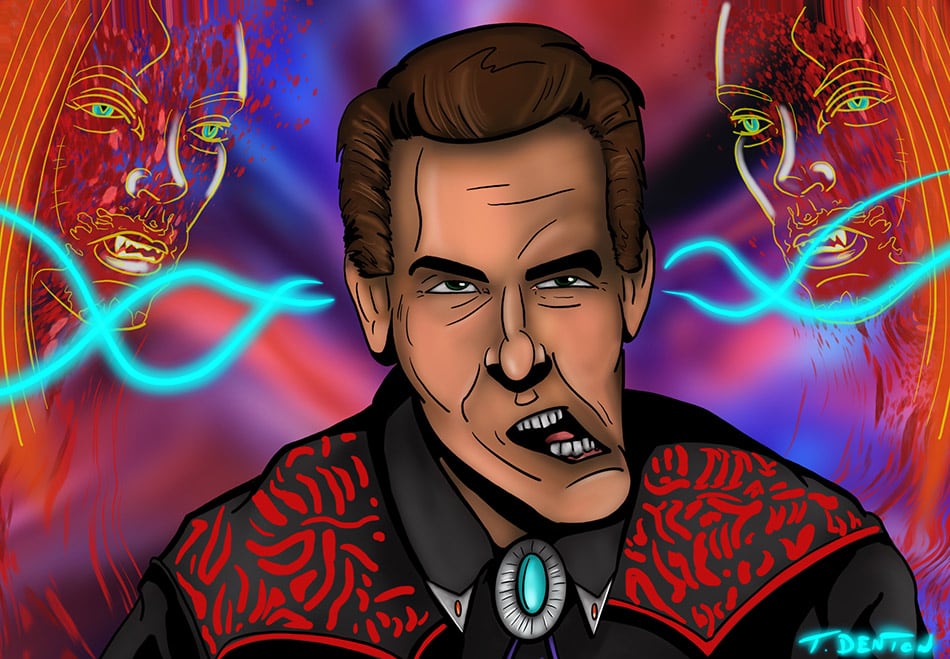 This week's double feature struggles with weighty existential questions: Is menstruation or lycanthropy the worse experience for a Canadian teenager? Does heroin addiction make you more likely to be abducted by aliens?

Back when there were only three broadcast TV networks and you had to subscribe to a fourth-tier cable network to be able to watch just three (on a typical night) segments of Joe Bob on Drive-In Theater, this Madison Avenue agency was still doing this great campaign for Lite Beer that carried the brand for years. (Heck, it debuted in the early 1970s, which would have made it run almost 15 years).

They’d get some retired sport stars (usually football players) to yell the following about the beer: “Tastes great!”

And then the other side in this argument would yell: “Less filling!”

And then the other side would get louder and yell: “Tastes great!”

And then the other side would get louder and yell: “Less filling!”

Eventually, about 23 seconds into the ad, the big star of the commercial would say that Lite Beer tasted great and was less filling, and that was it, buy Lite Beer.

There were about 11 bazillion of these ads. It entered into the national consciousness, perhaps too much so because you can see this superficial level of discourse EVERYWHERE now. It just gets louder and louder until everyone is typing in all caps.

Welp, four or so decades later, the horror community bears witness to its own Lite Beer debate.

Joe Bob tried to get to the bottom of it by going all the way to the sacking of Rome to Roger Corman’s flicks with Vincent Price roaming around torch-lit corridors festooned by spider webs to black-clad teens with jet-black hair and pale complexions who paint their nails black and listen to Bauhaus and Type O Negative and My Bloody Valentine.

Even a drive-in legend couldn’t figure it out, either. Like the moldy debate over Lite Beer, there are no real answers. It hasn’t mattered for about 40 years, and you either are or you aren’t.

And speaking of irregular flow, our first feature of the week kept our streak of four-star flicks going for at least one more episode as the Last Drive-In featured the Canadian werewolf classic Ginger Snaps that spawned a sequel and a prequel. Big thanks are due director John Fawcett and script writer Karen Walton because they had the courage to ask what experience would be worse for a red-blooded Canadian teenage girl at the turn of the millennium — getting her period or lycanthropy?

And that debate never truly gets settled in what JBB described as “one of the tightest drive-in scripts ever written” and “one of the most compelling horror films of the decade.”

Sure, Ginger got super healing powers, but she ended up mutilating dogs.

Sure, Ginger got super smelling ability, but she also grew hair in weird places.

Sure, Ginger started to get the attention of the boys, but she ended up alienating her sister and betraying the bond between them.

We know what side Teen Wolf came out on as far as this debate went (being human was better, even if being a werewolf meant that you could dunk), but the one with Michael J. Fox didn’t go nearly this far and didn’t have the performances that Katharine Isabelle and Emily Perkins gave. It also didn’t have these …

(As always, a special thanks to our friend who maintains the Shudder Twitter feed for uploading.)

It all added up to a flick that Joe Bob wouldn’t change a thing about, other than the triple-entendre title that simultaneously references cookies, photography and our protagonist her-ownself going wild.

The streak of four-star flicks ended with Fried Barry: the upgraded-to-three-stars adventures of Barry, a dude in Cape Town, South Africa, who looks like a goateed Christopher Lloyd-Michael Berryman hybrid with Bill Moseley’s Otis B. Driftwood hair but who wears more denim.

But before we get down to specifics, during the course of this episode, we learned a ton of important things.

Among em: Narcan saves lives, opioids have a legit medical use when not abused, Darcy went shark diving with flipping great white sharks in South Africa and Joe Bob can say “I don’t speak your language” in 45 different languages showing us all that this son of Krankaway County dirt farmers has come a long way.

Filmmaker Ryan Kruger has come a long way from his initial shorty-short version of Fried Barry that he submitted and won 12 awards at 57 festivals. He had a vision of making a cult classic and worked his tail off to get his indy odyssey (or is that odd-a –see?) in front of an audience.

Barry (played by Gary Green) goes a long way, too.

In a nutshell, Barry, not a good family man, fights with his wife, goes to a bar, listens to a guy rant about gloves on cartoon characters, shoots up some heroin with that guy, gets abducted by aliens, has something implanted in his butt and in his whangdoodle, gets beamed back to Earth, wanders down a road, sees a woman puke, is offered a chicken sandwich, witnesses a sex act in a bathroom stall, goes to a techno club, takes acid, steals a woman’s drink, twitches a lot, dances, makes weird faces, imitates that part in Army of Darkness when Bruce Campbell’s chin gets vacuumed so it’s pointy, possibly bites off some other dude’s whangdoodle and gets propositioned.

As a result of all the whangdoodle action, a break was necessary so we could treated to our first Felissa Rose sighting of the season. Our esteemed Intergalactic Mangled Dick Expert consulted her radio telescope, identifying the probing/implanting aliens as prime examples of the extraterrestrial pervos who hail from Proxima Centauri.

Then Joe Bob calls portions of this flick “Fellini-esque” during a break. He can’t take it back and it’s on record.

We rejoin Barry as he stands in a road, walks, ignores a beggar, hangs out with a sculpture in a park, looks at a happy family unit, saves a heart attack victim, gets picked up by his wife, eats a sandwich, regurgitates it, feeds his kid some yogurt, has sex with his wife (with protection), goes to the store, eats a cheese sample, gets his on by the cashier, watches TV, has sex with his wife again (with protection again), gets shaky in the bathtub, does an interpretive dance under a light pole, collapses, gets rescued, smokes drugs, twitches some more, walks around during a techno music interlude with headphones, rides in a van, flies, puts headphones on a guy who’s dying, ignores a tire, gets beat up by three thugs while wandering on the wrong side of the tracks but Barry makes one of the dudes have a heart attack as revenge.

Then Joe Bob mentions that Kruger said that there are about 80 references to other movies and that he worked without a script. Not a surprise. And things get ready to pick up as we get a snack bar intermission.

Barry’s drugged, abducted (again), imprisoned at a girl’s tea party, has a tooth yanked by the guy who abducted him, hits the guy with a rod, springs the girl, fights the guy who now has a chainsaw, recreates that scene from Evil Dead 2 (with blood spatter homage), liberates a bunch of imprisoned children, gets arrested, gets a shower and gets booked.

It’s here when we learn that Darcy’s been to South Africa and lasted longer in a shark cage than Richard Dreyfuss.

The now-in-custody Barry goes through an interrogation but doesn’t say much, so obviously he gets remanded to the loony bin. He meets a couple other patients, escapes in a John Carpenter homage, escapes, gets injected, trips, crawls, misses reconnecting with his wife, saves the hooker from before, meets his son who looks just like him, goes to the hospital, has a heart attack, dies, comes back E.T. style and gets beamed up.

If you missed any of that, just refer to JBB’s handy-dandy totals, courtesy our pals at Shudder. I know for a fact that I forgot to list the pimp scene and the Repo Man flying car journey over Cape Town.

Kruger’s got plenty of leeway for a sequel where the restored Barry (or Son of Barry, depending on your interpretation) travels to Tijuana, Mexico, to reconnect with his alien side and eat burritos in Refried Barry.

Mutants from way, way back who are familiar with the cardinal rule of Drive-in Filmmaking will remember that a drive-in flick can be anything, but it cannot commit the sin of being boring.

Fried Barry definitely avoided that, but maybe its vibes were a bit too strong. I mean, if it gets the redneck drive-in critic from Grapevine, Texas, to compare it to something that Fellini did, somebody must be tripping.