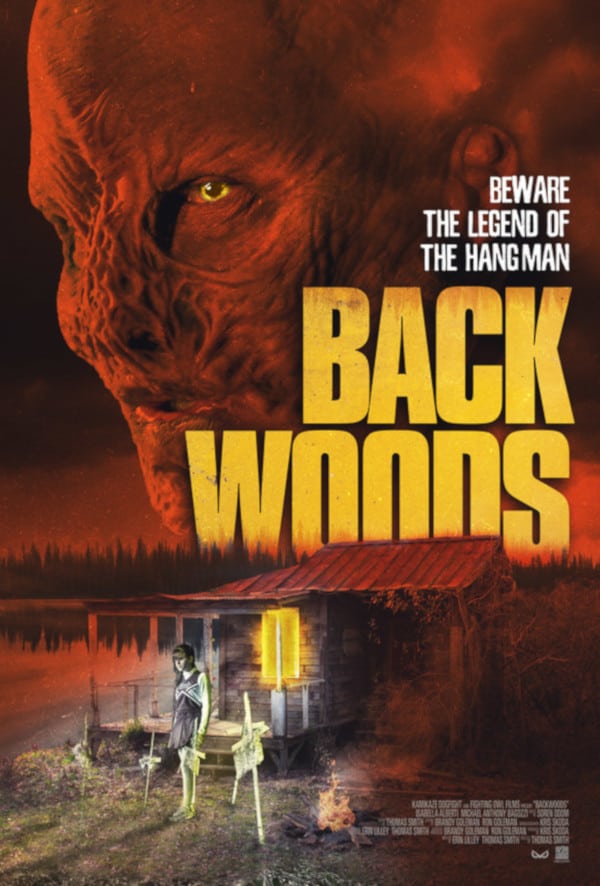 A high-school cheerleader gets abducted and tries to survive an encounter with a lumpy-headed creep who lives in a shack in the middle of the wilderness in "Backwoods."

Our friends from Fighting Owl Films down in Mobile, Ala., led by director Thomas Smith, just released their latest flick. You might remember them for their quirky supernatural detective opus Demon Squad that I reviewed a while back, and this one, released Dec. 1 on video on demand, is called Backwoods.

Basically it has a guy in a shack out in the woods who snags prospective wives from the surrounding area, steals their cell phones so they can’t call for help because the batteries run out, puts daisies in their hair and ties them to the bed in the back room. Then, if he really likes em, he lets em get really dingy and buries them out in the woods with their driver’s licenses marking their graves after they die.

In other words, he’s one of those big backwoods romantics us Drive-In Mutants are all familiar with but wouldn’t ever want to meet.

But before we get to the goings-on of this guy, who’s known locally as the Hangman and is just keeping up the family tradition of abduction and ex-wives set forth by his sire, there’s a bunch of character development as told through about 19 metric tons of Flashback Fu. See, co-writers Smith and Erin Lilley know that it means more to an audience in the end if you get to know the teenagers whose lives are getting threatened.

But before we get to the chronological start of Backwoods – i.e., the earliest part of the story in the timeline, the initial scene shows us that a cheerleader named Molly (Isabella Alberti) has been bound, gagged and thrown in a trunk.

But before we get to see how Molly got into that predicament, we see how she was cheering at a high school football game, and how the team waterboy named Noah (Michael Anthony Bagozzi) has an unrequited crush on her. But since she’s going out with the starting quarterback Hunter (Matthew McCoy), Noah gets mad and punts a whole bunch of Gatorade across the field even though the Fighting Owls kicked the crap out of their opponents, 42-18, and Molly invited him to the after-game house party where all the cool kids are drinking.

Somewhere in there there’s a flash forward when Molly clocks this guy in an owl mask in the head after she gets out of the trunk and he starts running after her in the woods and trips a trip wire and gets clocked in the head again by a big piece of lumber.

But before we see how the party’s going and how Molly got shoved into the trunk and who did it, we also get a flashback inside a flashback of how Hangman’s Hollow, the wilderness area where the party is going on, got its name. See, there was this stringy-haired guy who kidnapped a whole bunch of women and killed and hung the men all over the woods before the cops killed him, but he had a kid.

(All the chronological hopscotching happens in the first 20 minutes in the flick that’s 70 minutes long, by the way).

So the flick does get a little bit bogged down with the ping-ponging back and forth in time with the high-schoolers’ party leading up to an encounter with the Hangman as they look for the abducted Molly. It does set up things for the hard-right turn where our expectations about a couple of the characters get reversed, but a couple of the time hops could have been avoided before we get to the Hangman imprisoning kids in his shack.

The Hangman himself – he’s pretty impressive and capable of shooting, hacking and trapping folks who intrude in his woods. Played by Scott Alan Warner, he looks like Dr. Phibes with a lumpier head wearing a Fruit of the Loom thermal Henley shirt, has a CB setup and listens to scratchy organ and gospel music on an AM radio to up the creep-o factor (and that’s before we learn he keeps women tied up in filthy conditions).

• Best Way Not to Establish Diplomatic Relations: Noah, taken prisoner along with Molly in the Hangman’s shack, fails to take notice and compliment the extensive license plate collection his captor has accumulated and instead says, “Don’t shush me, you backwoods mongoloid,” “Real mature, you inbred hobgoblin,” and  “Leave her alone, needledick.”

• Best Opportunity for the JV Squad to Step it Up: The Hangman takes out three members of the Fighting Owls varsity team, giving the up-and-comers their chance next season.

• Best Display of Enthusiasm: Molly’s younger sis, Olivia (Angelina Alberti), en route to the post-game party: “The hermit’s dead, you suck at pranks and the party’s that way — onward!”

• Best Plastic Surgery Alternative: Stick around for the post-credits scene where you see what the Hangman does when he sees a pretty face.

Three stars here. Well-shot and with great, high-quality cinematography by Kris Skoda, Backwoods is sufficiently intense once it gets rolling on a straight-and-narrow chronological narrative instead of hopping around, and turns out to be the mutant cross of Wrong Turn and Can’t Hardly Wait with more hatchets, nooses and face carving than the one that has Jennifer Love Hewitt. A quality effort by co-writers Erin Lilley and Thomas Smith once again – we’ll be looking forward to seeing what’s next for these indy filmmakers out of Mobile.

Check it out to stream on Amazon Prime, iTunes, Google, YouTube, Fandango or you can get physical as well on DVD.