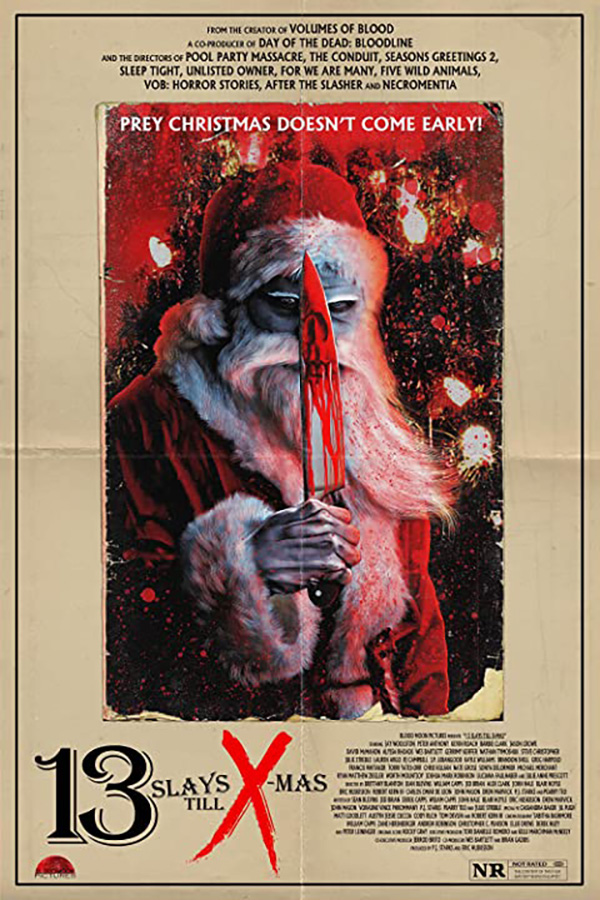 As this year’s holiday review, I checked out 13 Slays Till Christmas, an anthology of a bunch of short films preceded by a fake trailer, all Christmas-related.

The vignettes are uniformly solid. Some are a bit less developed than the others — you’ll always get that when there’s that many cooks in the kitchen and stories to tell in one anthology — but none overstays its welcome.

The framing story is a bunch of people gathering at a local watering hole discussing how there’s a bunch of killings that happened in the town and there’s also a bunch of human trafficking going on in the area, too. So we’re not talking Frankenmuth, Michigan, here when it comes to holiday spirit.

Anyhow, everybody in the bar – a cop, a priest, a guy with a Vanilla Ice hair and a scarf, a guy in a lumberjack shirt who uses a wheelchair, a guy in a Santa suit and the bartender pass the time amusing themselves by telling these creepy stories, as follows:

Vignette 1 – “Like a Family”: A woman is summoned to help decorate the old family home one last time by her sister.

Vignette 2 – “The Devil’s Due”: A single dad and her daughter run afoul of the dad’s doppleganger.

Vignette 3 – “One More Gift”: A couple of killer roommates celebrate the holiday in their own special way.

Vignette 4 – “It’s a Wonderful Death”: A guy considering suicide is visited by the anti-Clarence.

Vignette 5 – “Don’t Kill Santa on Christmas”: Two guys break into a house with murder on their minds.

Vignette 6 — “Kringles the Christmas Clown”: A family is visited by an evil Christmas clown.

Vignette 8 – “The Scarionette”: A killer doll is unleashed from storage.

Vignette 9 — “A Christmas to Dismember”: A Christmas killer is on the loose, then gets a visit in the asylum.

Vignette 12 – “Killer Caribou”:  A guy out in the woods takes care of some special reindeer.

My faves were Numeros Four-o, Ten-o and Twelve-o and even if you don’t like one of the segments, there are a number of in-references to classic horror flicks by John Carpenter and others to keep an eye out for as well.

Best Way to Fight Your Vengeful Junkie Sister’s Ghost: Whack her upside the head with a wreath.

Best Dexterity: This doppleganger’s thumb is so strong that he shoves it through the back of a girl’s skull.

Best Pun: The text a dead guy gets from his ex in a posthumous invitation over to celebrate the holiday.

Best Gift: The anti-Santa is really nice to Parker — she gets two gifts every little sister needs.

Three and a half stars.

Check it out streaming on TubiTV, Plex and Jeff Bezosville or you can get it on physical media directly from our pals at Scream Team Releasing.

If you want some more suggestions on what to watch once you’ve gotten through the Ghoultide Get-Together and 13 Slays, just because it’s kinda hard to remember that far back, here are a few more holiday-themed reviews by yours truly:

Anna and the Apocalypse

Have a safe and great holiday!