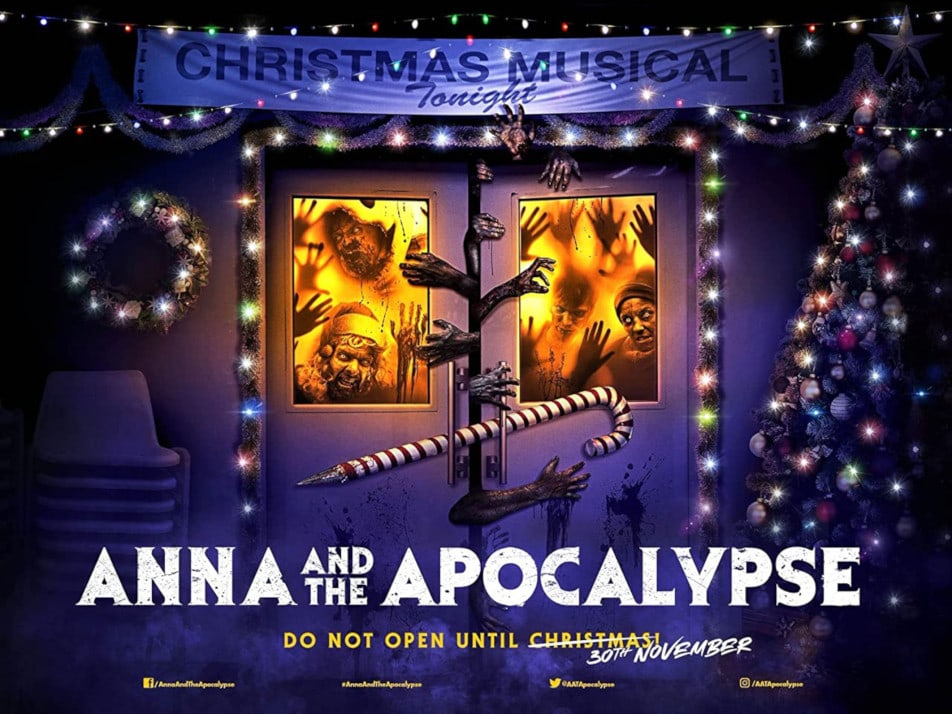 A superflu pandemic that started in the U.S. ends up resurrecting the dead and a plucky group of high schoolers who have a tendency to bust out into song tries to cope with their rotten and stinky new world in Anna and the Apocalypse.

This flick takes place in Great Britain because the steering wheel’s on the wrong side of the car in the opening scene and they’re listening to BBC News.

Best way I could describe this one is imagine if Doctor Butcher, M.D. grafted an episode of Glee onto the rotting corpse of that part in Pink Floyd’s The Wall where the one teacher is yelling about pudding and stuff and, oh by the way, it’s Christmas.

I fully expected to not like the exploits of Anna and her quirky classmates because sewing together a zombie flick and musical numbers about the difficulty of being a teen in high school seemed to me like director John McPhail was performing the same sort of exercise as, say, duct-taping scuba flippers onto a camel’s hooves out in the Sahara and seeing what happened. It’s doable. It’s impractical on its face, and well, would the fan of the typical zombie flick REALLY want to sit through some perky High School Musical-style interludes before the next disembowelment or zombie dispatch sequence and be entertained?

Yes and no. The flick’s not for every Mutant. Folks who lean toward the horror and zombie side of things are likely going to get impatient for the apocalypse to arrive. People who love Fulci or the Dawn of the Dead remake likely will hate Anna’s exploits because it’s slow going to start, sentimental and British.

There’s a half-hour of exposition so we can meet Anna Shepherd (Ella Hunt), who’s decided to travel to Australia before starting college and her pop (he’s the school janitor and can give Anna’s would-be suitors the stink eye in the hallway) doesn’t like the decision.

We meet Steph North (Sarah Swire), the school newspaper editor who’s simultaneously trying to make the world a better place and butting heads with Arthur Savage (Paul Kaye), the draconian bushy-bearded headmaster guy who patrols the halls to prevent kids from making out and has an unnatural confidence in the system, even in the face of societal collapse when stuff goes down.

There’s a song about breaking away.

There’s a rehearsal for the winter gala showcase performance.

The main characters sing in the cafeteria about how there is no such thing as a Hollywood ending.

At the 17 1/2-minute mark, the zombie sightings are outnumbered by the musical numbers, 2-1. This disparity grows.

The holiday gala happens, and we get two guys dressed up like penguins rapping about fish, and then Lisa does a song about wanting her chimney unclogged, getting the conservative Savage all p.o.ed. He doesn’t cope with innuendo very well.

It takes about 25 minutes and five musical numbers before Anna walks out of her house, puts in her earbuds, and we have a reprise of that scene in Shaun of the Dead where he was oblivious to the zombie apocalypse that’s happening along with musical number Numero Six-o.

A half-hour in, we finally get our first zombie decapitation via teeter-totter and get into the siege/societal collapse part of the flick with folks posting their “#Evac selfies” on social media before the power plant blows, internet service goes to heck and song seven laments about modern civilization’s dependence on technology as a poor substitute for human contact.

Kind of like muesli in a bowl, the horror, humor and sentimentality don’t always meld once the zombie apocalypse hits. It’s worth noting that Ryan McHenry — the writer of the short Zombie Musical that inspired Anna and the Apocalypse — did the “Ryan Gosling Won’t Eat His Cereal” videos but sadly died of bone cancer before he could see his vision turned into a full-length feature. The flick is dedicated in his memory.

Alan McDonald took on the task of expanding McHenry’s vision, and the flick continues to be chunky as it goes from high-school drama to zombie survival flick — one part in a Christmas tree farm in the flick’s spookiest and most atmospheric scene, some slices of sentimentality are dropped here and there when they get back to the school and some ironic humor all lead to an end that any zombie aficionado can see coming, but with more singing.

For those who keep track, the number of zombies killed ends up finally surpassing the flick’s 11 songs prior to the credits rolling, meaning that there was enough zombie slaughter for …

Best-Suited to Cope With Societal Collapse: The independent Steph, who not only is a journalist, but she also says stuff like:  “Big Pharma’s being doing weird shit for years, it’s a big cover-up,” “Certain death is so much fun” and “Boom! Saved your life!”

Best Set o’ Balls: When John makes a zombie-brain sammich using two 11-pound — wait, it’s Britain — 5 kilogram bowling balls after he and Anna flee to their place of employment to hole up.

Best Use of Cooking Apparatus: Steph impales a zombie with a spatula.

Best Use of Cleaning Apparatus: The same zombie that goes to Spatula City gets finished off with a mop handle through the ear.

Best Rube Goldberg Use of Bowling Apparatus: Steph lands a strike on a zombie’s legs and causes it to topple. Its head gets caught underneath the pin-clearing apparatus at the end of the lane and removed from its body, then shuttled through the bowling ball return.

Best Use of the Loo: Steph crushes a zombie’s head with a toilet seat.

Best Use of Holiday Decor: Anna beats the heck out of a ton of zombies with an unbreakable candy cane decoration she finds.

Best Display of Holiday Spirit: A couple of characters remember to tell each other “Merry Christmas” before one of them turns into a zombie.

Actions Best Explained by his Unhappy Upbringing: Headmaster Savage says stuff like “Withdraw your tongues” and “Please remember a hand sanitizer is your friend and kissing on the mouth is not” during a pandemic, and “It’s time we had a little chat about health and safety.” while threatening to make Anna’s dad clean the school toilets and “The government will sort this out” and “What do we do when civilization is on the edge? We prioritize” before locking folks in a cafeteria with a bunch of zombies.

Best-Laid Plans, Foiled: When Anna, Steph, John and Chris evacuate their bowling-alley refuge by trying to do a crab-crawl through a group of zombies while hiding underneath an inflatable kiddie pool but then an elderly zombie sits on the pool and pees.

Best Display of Toxic Masculinity: Jock Nick (Ben Wiggins), Anna’s ex, saves her and her three companions from zombies and  says “Hiding’s for pussies Johnny, we’re hunters” before doing an “Eye of the Tiger” power rock number about being a soldier at war while he and his cronies do the British approximation of those mobs at the end of Night of the Living Dead by bludgeoning the crap out of zombies all by themselves.

This unusual holiday-flavored hybrid gets three stars. The closer in years you are to the adults in this one and the more zombie flick experience you have, the less patience you might have in seeing the fates of the characters play out, and the more likely you’ll think the flick skews toward the sappy. Still — there’s nothing wrong with having some characters getting their feelings tugged in one scene and their intestines getting tugged in the next.

Anna and the Apocalypse is available to stream for free on Hoopla, Kanopy and Pluto TV or you can go the physical media route as well.

Check it out, and I hope everyone has a great holiday weekend! See you next week!