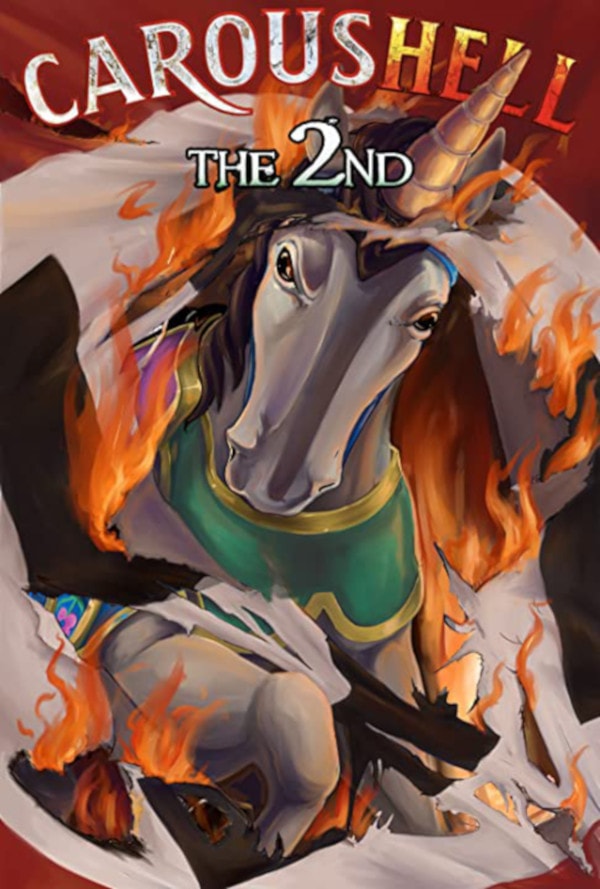 Duke the homicidal unicorn has to rescue the hybrid human-unicorn son he never knew he had from the evil forces who created him in this sequel to 2016's "CarousHELL" by Pittsburgh-area filmmaker Steve Rudzinski.

About a year ago, I got the chance to review CarousHELL, the brain-melting 2016 indy flick from Pittsburgh-area filmmaker Steve Rudzinski in which Duke, a unicorn on a carousel that is somehow sentient thanks to Nazi mysticism, gets pushed over the edge by a kid putting boogers on him and so frees himself and starts killing people.

We even got an Alien chest-burster homage at the end.

Well, CarousHELL the 2nd is out, and it was just what I needed to finally clear off my two-week bout with sequelitis (appreciate all the well wishes, BTW). Pretty soon the itching in sensitive areas will subside, and we’ll be good for the rest of October starting with Joe Bob’s Halloween Hoedown on Friday on Shudder.

This one goes in different directions from its predecessor rather than follow our fearless Redneck Reviewer’s first rule of sequel-making that I talked about in my last review. The plot is all about reconciliation, reconnecting and revenging the crap out of Nazi jerkwads. Who can argue with that?

See, it’s revealed in this one that Nazis led by the unaging Ilsa (Aleen Isley, who co-wrote the first flick with Rudzinski and did the same for this one) trapped Duke’s soul during WWII in the shell of a carousel unicorn as an experiment with the occult intended to create a legion of alpha soldiers to assist their efforts in WWII. So that’s how an inanimate carousel unicorn (chosen by Young Hitler and Mom Hitler) became sentient in the first place.

Understandably, living 75-plus years as a disembodied soul spinning on a carousel is bound to make a guy angry, and that’s why Duke was so touchy and downright homicidal in CarousHELL Uno, aka Falling Down with a unicorn.

Here we see the kinder, gentler, softer side of Duke (again voiced by Steve Rimpici) with 99 percent fewer on-screen civilian homicides. He learns after about four years of crossing the country in his stolen SUV murdering people off camera that he’s a dad, and so he wants to develop a relationship with his cute puppet son, Robbie (voiced by B. Barnabel), and make up for the parenting time he has lost.

Essentially it’s like the last scene of Field of Dreams with a proud unicorn dad and his human-unicorn hybrid offspring bonding, eating hot dogs in the park, finding each other through adversity and eradicating evil through their combined power of laser eyes and rainbow puke. As a dad myself, it placed a single horn right in the feels. I ought to be able to walk in a day or so.

Rudzinski stayed behind the camera this time (he played Joe the beleaguered and ultimately stiffed delivery guy from Pete’s Pizza in the first one) as director. The flick weaves enough references from the first one that for best results you’d want to check it out before giving this one a whirl, especially if you want to make sense of the post-credits scenes,. However, if you just want to see a unicorn-on-a-mission re-create the plot of Commando and rescue his uni-napped son from Nazis, by all means go in cold.

• Best Technique: The soul-extraction procedure that Ilsa developed for unsuspecting males is pleasurable, practical and effective. Worse ways to go can be imagined.

• Best Way to Deal With an Awkward Situation: When Duke talks his way out of a potential Last House on the Left situation after realizing Ms. Laurence (Judy Casella) is the mom of two kids he offed on his rampage in the first flick and she’s been taking care of Robbie ever since.

• Best Master of Disguise Since Sam Smith from Attack of the Killer Tomatoes: Has to go to Klaus (Mark McConnell Jr.) who’s Tim, the hotdog salesman at Frankenfuhrer’s; Steve, the mulleted balloon salesman; and Buddy, the founder and friendly leader of the Trail Buddies who has mastered the art of targeted marketing. Klaus can do it all and tell you a long story about his childhood background that led him on his current career path that isn’t at all suspicious and his three attempts at capturing Robbie carry the second third of the flick.

• Best Way to Up the Body Count: Katrina (Rebecca Rinehart) hires three guys off the internet so Duke has some more people to kill creatively during the final infiltration.

• Best Love Scene: By default, it goes to Duke and Otto (Terence Lee Cover), Ilsa’s repentant underling, who tenderly recreate 15 positions of the Kama Sutra in the romantic interlude before the Big Showdown.

• Best Visual Expression of the Heartbreaking End to a Relationship: What happens when Ilsa goes off on poor Otto prior to the final showdown against Duke.

• Best Drive-in References: When Duke goes all The Burning with some shears on a random Karen in a park and when Duke re-creates Jason’s bashing-a-wrapped-up-person-against-an-immovable-object-to-bludgeon-them technique with a Nazi lackey. And, of course, naming a Queen Bee Nazi Ilsa and directly quoting Aliens goes without saying, you know?

• Best Teaser: Duke didn’t get the job done with one of the victims from the first flick, and now he has his own unhinged Snake Plissken-type enemy to deal with. If you saw the first one, you’ll know who it is.

While the sequel is lacking in some ways the attitude and anarchic impropriety that made the first CarousHELL reminiscent of early Troma flicks (there are no incestuous Quebecers, there’s a bit less in the blood department and just the one Karen gets offed — the rest are Nazis or their lackeys), this one does put the “uni” in family unit.

The stage also has been set for at least one absolutely berserk encounter-to-come if Rudzinski and Co. decide to clean the dried blood of Duke’s enemies off his damn-pretty white resin for a third wild CarousHELL go-round — Duke Pandorum, anyone?

As Duke his ownself said, the ride ain’t over.

There’s a grand premiere for CarousHELL the 2nd planned this weekend at 4 p.m. Oct. 10 at the Hollywood Theater in Dormont, Pa. For tickets, check out www.hollywoodtheaterpgh.org. The flick will be made available soon for streaming on Rudzinski’s own service (stevebuster.com) and physical media copies can be had from the Silver Spotlight Films web store.

Check it out, and I’ll be back next week to start a streak of Halloween-related flicks because it’s October and that’s what we do around here.