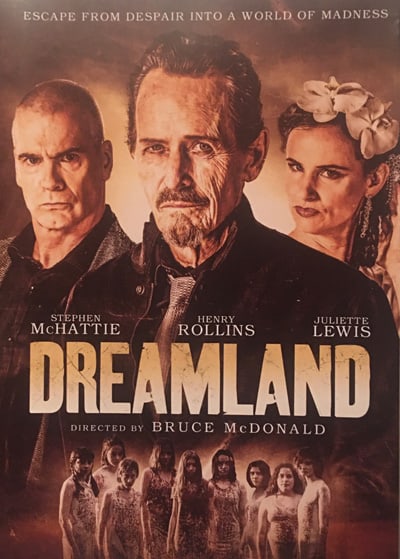 Ben Nagy Reviews ‘Dreamland’: The Director of ‘Pontypool’ Does a David Lynch Flick

"Dreamland" picks up where the post-credit scene of "Pontypool" leaves off with Stephen McHattie as an assassin roaming around in the rotten-at-the-core "Dreamland."

It has been a long-standing tradition for me to celebrate the day before Valentine’s Day in the proper post-modern manner and this year is no different, so let me be the first to wish all of you a very happy 60th Rollins Day.

Rollins, of course, is Henry Rollins, who started out as frontman for 1980s California punk band Black Flag and then began his own Rollins Band in 1987 that toured for a couple of decades when he wasn’t doing spoken-word tours, writing books, taking photos, performing voiceover work, acting, hosting TV shows, hanging out with William Shatner on occasion, being a world traveler and hosting his own radio show.

I was introduced to his music through Beavis and Butthead — that bastion of 1990s culture — when some Rollins Band clips were featured during the music video interludes. I liked what I heard, and a fan (he calls em “Fanatics”) was born.

The name of his publishing company, 2.13.61, reminds us of that very first Rollins Day. To mark this one, I put in the most-recent full-length movie he’s been in, a flick released last summer called Dreamland. Upon watching it, I’ve determined that it has his second-best all-time film performance behind He Never Died, a flick Rollins did when he played a vengeful fallen angel (think the Punisher, except fewer bullets and more biblical). That one is worth checking out.

And it’s fairly appropriate that the review I did before this one was for Pontypool, because Dreamland serves as a stealth sequel to the Pontypool post-credits scene where star Stephen McHattie waves a gun around, banters with his real-life wife Lisa Houle and calls himself “Johnny Deadeyes.” We’re not talking world-building on a Marvel movie level, but Dreamland has the same director (Bruce McDonald) and writer Tony Burgess is aboard as well.

The cast is pretty awesome – McHattie is here in a dual role. Houle appears as the moralistic and maternal center in the seedy world of the Al-Qaeda Bar. Juliette Lewis shows up in every scene she’s in wearing a different outfit playing a countess who lives in a palatial estate and serves as a patron to heroin junkie trumpeters. Rollins shows up as Hercules, the main baddie, a petty, detestable crime boss who owns the bar, abducts and pimps out young girls and holds grudges when spaced-out musicians don’t remember his name when signing an autograph to him.

The flick starts out with a bang — four of them, in fact, as McHattie in role Numero Uno — that of a craggy, long-haired assassin in Hercules’ employ — takes out four child traffickers who were the main focus of the flick’s first five minutes. Hercules wants to corner the market on selling underage girls here in Dreamland so all “the rich f— pedos have to come to us,” and that’s why the hit was put out.

The assassin does Hercules’ dirty work — his next assignment is to amputate the little finger of a burned-out and strung-out jazz trumpeter (McHattie’s role Numero Two-o) to send a message. But then we find out that even this assassin has a limit — especially when a girl he’s neighbors with has been caught up in Hercules’ criminal enterprise.

• Best Foreshadowing: The assassin spills a big bottle of wine in his apartment. He spills a lot more blood at the wedding reception he crashes.

• Best Appendage to Lose: The right pinky finger, with or without a permanently wounded nail.

• Best Way to Convince a Vampire Not to Feast Upon the Blood From Your Open Arm Wound: Hercules — “I got AIDS.”

• Best Way to Maintain an Adventurous Domestic Relationship: The husband-and-wife pawn shop owners have some issues with their marital bliss, or maybe it’s just a regular Friday afternoon for them.

• Best Priorities After Recovering From a Near-Death Experience: The assassin tells his saviors that he needs a shower and a gun before trying to rescue his neighbor from being a vampire bride.

• Best Way to Keep Labor Costs Down: Hercules has a gang of gun-toting kids wandering the streets of Dreamland. They’re pretty dang mean and good shots to boot, but they don’t pay too much attention to detail as child assassins are inclined to do. You get what you pay for.

• Best Hannibal Lechter Impersonation: The Countess’s Vampire Bro (Tomas LeMarquis) freaks people out by doing that hiss-inhale-tongue-clicking thing that Anthony Hopkins made popular in Silence of the Lambs.

Dreamland is an interesting case of having all the elements of something that could have been positively mind-blowing, yet simply tiptoes up to the line of the bizarre. Early on there’s a hallucinatory dance interlude and a vampire shows up. But like the vampire, who tempts us with but never really does anything overtly vampiric beyond bearing his fangs and licking a little bit of blood from his finger until the very end, all the weirdness never crosses into the amazing.

A scene early on in a pawn shop is so darkly comic that it’s regrettable that the expected exclamation point of a gunshot never comes. There’s also a certain irony during a pursuit in a pretty place such as Dreamland that a dumpster is the safest place to take refuge. A melding doppelganger thing that happens between the two characters McHattie plays. But it could have gone further.

The setting — it was filmed in Luxembourg and Belgium — helps provide an otherworldly quality. Externally we see the Euro architecture and the setting appears as a kind of glistening fairy-tale shell. On the inside there’s some of the most rotten things imaginable going on. People lose body parts. The whole child-trafficking thing. Marrying off a teen to a bald fanged guy who’s going to suck her blood. Drug overdoses. Amputations. A gunfight at a wedding reception. A wedding cake is used as a shield. All told, the performances are uniformly solid and McDonald hits about a 0.45 on the David Lynch Bizzaro Meter with Dreamland.

Check Dreamland out on Amazon Prime or on DVD.