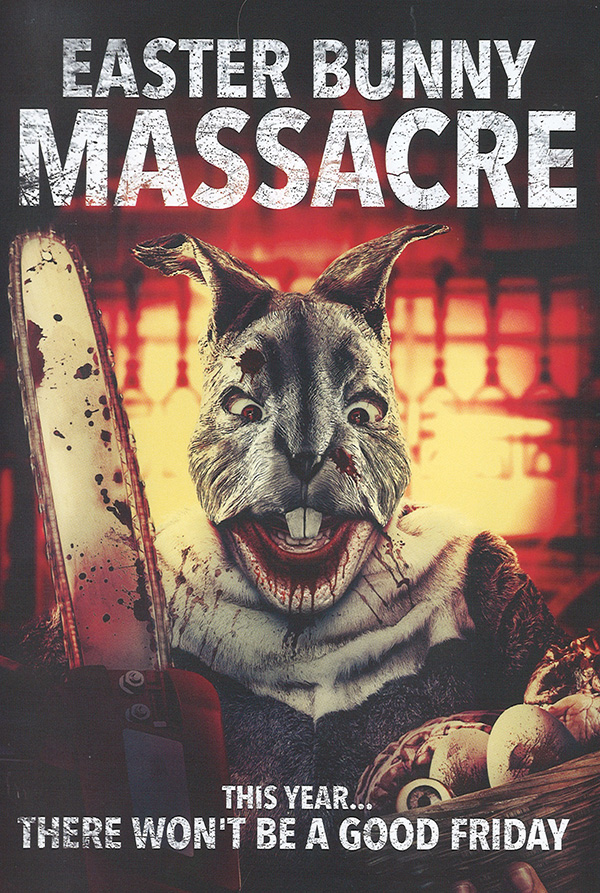 Do NOT judge a DVD by its cover.

I’m old enough to know that, but I did it anyway, even at my advancing age.

There it was, sitting on the third shelf at the local Wally World for $9.96 on the end cap. A weird bunny-headed killer WITH a chainsaw on the front of the DVD grinning at me promising to split some skulls like a Cadbury Creme Egg. I already had it in my mind that I needed to come back with something holiday-themed since I messed up and forgot to do a flick for “Stone Cold” Steve Austin Week on March 16 and that came after I ran late for my Henry Rollins Day review. In other words, I haven’t been keeping my my eyes on the prize. Then, along rolls April, and this fool still has to finish up his taxes AND has ticked off the audience as well.

So I thought watching Easter Bunny Massacre (aka Easter Killing) would help because of that flipping homicidal bunny on the cover. The taxes can wait, right?

Back to Easter Bunny Massacre. It’s cut from the I Know What You Did Last Summer mold, except it’s British. A bunch of young adults are present at the summary deathification of one of their “friends” named Heather (Antonia Whillans). But because they were all hopped up on the drugs and the drink and the crisps (it’s what British folks call potato chips) and then doing their interpretive performance-art recreation of Where the Wild Things Are around the campfire at their Easter get-together in the woods, none of them know who donned this poofed-out gnarly bunny mask while at their campsite and played hide-the-scissors in Heather’s torso and abdominal area about 31 times.

(For good measure, the Bunny of Death does the Michael Myers neck tilt after ruining Heather’s leopard print.)

So the ones who haven’t been stabbed wake up simultaneously, even though some of them were so wasted that they slept with their Chuck Taylors on. All of them are really confused because the killer had the wherewithal to smear blood on everybody to cast suspicion on all of them, and they don’t even know what they did that night (some of em probably aardvarked each other, but we don’t see any of that).

Cue the big argument about what to do with Heather’s body. The leopard-print top she was wearing can’t be recycled nor donated to a consignment shoppe (that’s how they spell shop in Britain), so they throw that sucker on the campfire. The alpha of the group, at least when it comes to self-preservation, is a guy named Neil (Tom Nguyen), who persuades everybody that they need to bury Heather’s corpse or drop it in the river to cover up her death. But before they make a decision on their way forward, they say “uni” a lot because instead of saying university or college, British folks say “uni” and they’re worried about their educational futures going forward because, oh yeah, one of their friends died and there might be something in the uni code against being present and potentially culpable for the death of a friend.

Then they put up a wooden cross memorial and hang her necklace on it, shed a few tears and make a solemn pact not to talk about Heather’s death and instead refer to her as “missing,” so I guess they ended up trying to have it both ways.

But ONE YEAR LATER … they all get invitations for an Easter party signed from “Heather” to come to this house, so we don’t know if she’s dead or she’s alive and wants revenge or if she’s a zombie or it’s all an elaborate hoax.

It does sorta rule out a third party psycho roaming the woods in a bunny mask killing Heather because:

They all show up at the house, minus one dead friend named Zora, who they believe killed herself. The half-brother of one of the campers also shows up because we need another person to fill out the cast. A new girlfriend also shows up to support Neil and that lasts like 10 minutes before she finds out they covered up a possible murder and so she wants to split. There’s this Easter-egg hunt sequence when they all go from room to room finding clues like Velma in “Scooby Doo” and playing recordings of Heather’s voice that egg them on. (It’s an Easter flick review. Had to do it. Not sorry.)

There are a lot of dialogue-heavy scenes with static camera work. We root (kinda) for Carl, (Michael Hoad), the med school student whom the narrative focuses on. He’s the main identifiable character just because he’s the first person to wake up after the party. Not going to spoil the mystery here, but it’s pretty simple to figure out what’s going on through process of elimination, especially when taking into account the elaborate staging at the house for the campers’ reunion. Plenty of Rashomon-type altered-perspective flashbacks to establish the motive of why they’d want to kill Heather.

Long story short — they all had a reason to, she was that much of a bitch. (Not going to say the British word).

Best Offing: The Bunny Killer dumps some melted chocolate off a balcony onto Neil’s head and he obliges by just standing still so the killer can run down a couple flights of steps and stab him repeatedly. Instead of it just running down his face, it hardens and immobilizes him so he can’t move.

Best Reason to Not Come Out: Tom (Genna Loskutnikov), the sympathetic jock, was going to tell his friends that he was gay, “but things got a little sidetracked.”

Best Way to Avoid the Killer: There are multiple scenes of characters sitting in the foreground of the shot with an object shielding their backs from the killer and then covering their mouth. It has a 50 percent success rate.

Best Equipped Murderer: The Bunny Killer doesn’t use a chainsaw, but does have a hammer and a baseball bat, which is odd because they’re in Britain and we all know from Shaun of the Dead that it’s easier to get a cricket bat in Britain.

Best Error in Judgment: The Bunny Killer eschews the gun to use more manual weapons to go after the survivor.

This one is not going to supplant Night of the Lepus or watching the rabbit attack scene from Monty Python and the Holy Grail over and over again as the go-to Easter movie tradition in my household. The cover made me think this was going to be like Pieces except with a bunny-headed killer. (Why aren’t more movies these days like Pieces?)

No garbonzas. Some mystery. One really good cinematic moment that is the direct opposite of the “run, rabbit, run” scene in House of 1,000 Corpses.

One-half star. It’s on TubiTV and it’s at Wal-Mart. Once again, there are no chainsaws in this film. Call me disappointed. (That’s miffed in British).

Check it out, maybe.