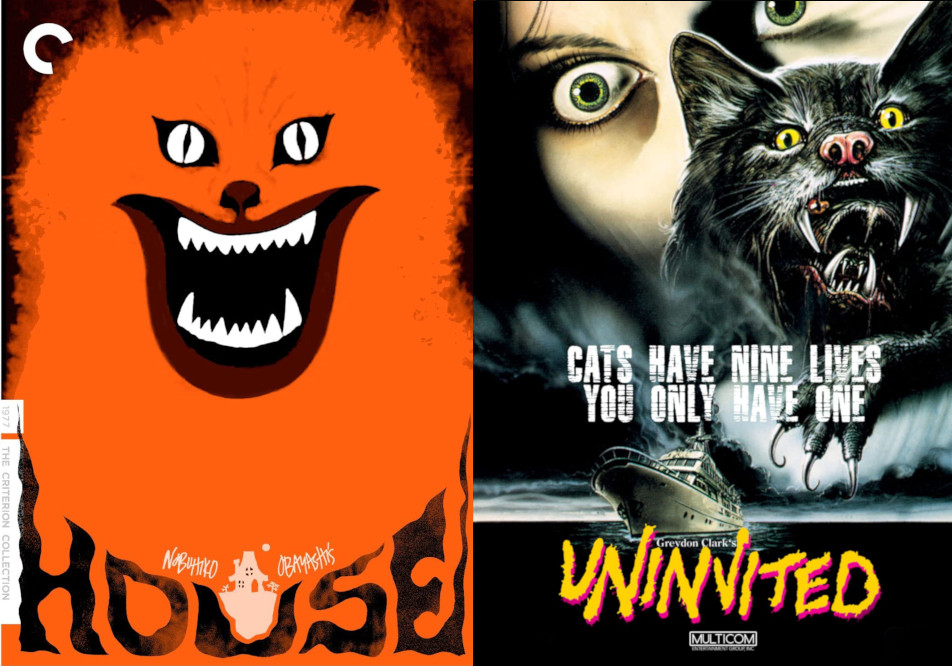 Ben Nagy reviews ‘House’ and ‘Uninvited’: A shameless attempt to get along with the cat people in the new year

Before I get into how my movie selections ruined New Year’s Eve, I have to set the stage.

At least two people in my house are CAT PEOPLE.

We are not talking about Nastassja Kinski and Malcolm McDowell, so I don’t have to worry about any kind of transformations where they get all fired up, transform into big felines and rip my guts out. But they have a good working relationship with the little gray cat that lives in our house while, kind of like half of the U.S. electorate, the other folks in the house are disregarded and quite possibly actively disliked by the cat.

Fine by me. My relationships with cats were forever altered when my little sister’s cat Frisky was suspected of (but never definitely proven of) assassinating my favorite aquarium fish that was found dead outside of the tank when I was 11. His name was Igor. He was a red-tailed shark (not really a shark). He is missed.

But the main selling point of the two movies I gathered my crew around to watch on New Year’s Eve was that they both featured cats in key roles. I wanted to end the year on a positive note, do my best to build a bridge. No genetically engineered dog-attacking-cat-and-swallowing-it-whole scenes like in Man’s Best Friend. There would be harmony and peace as we turned the page on 2021 with the cat on a cat person’s lap and two movies that featured cats in key roles.

First flick we watched was House (1977). This is not the one from the 1980s with the Greatest American Hero, William Katt, fighting a zombie marlin and then later on Bull from Night Court who’s an undead Vietnam soldier. Nor was it the melodrama that played on Fox television for eight years with Hugh Laurie playing the AMA equivalent of Sherlock Holmes where he wears scrubs instead of a deerstalker and a cape.

This one was a Japanese oddity put out by the Criterion Collection (?!) and reminded me of a mindbending adaptation of a “Scooby Doo” episode where instead of Fred and Shaggy, we have seven Japanese schoolgirls playing all the roles of the gang, no dog, and a scenario where our intrepid group enters the spooky ghost-haunted-house of one of their relatives for a summer break trip.

The impetus of the whole situation is some family melodrama involving Gorgeous (Kimiko Ikegami) not getting along with his dad’s new fiancee. So her pals Mac, Sweet, Melody, Fantasy, Kung Fu and Prof accompany her to Gorgeous’ aunt’s house where the gals start disappearing a la The Devil’s Nightmare in accordance with their names. There’s a demon-cat-with-green-laser-eyes guardian, and it turns out that the grief of Gorgeous’ aunt can write letters, use the Japanese postal system, cannibalize the energy of youth to rebuild a presence on the physical plane in conjunction with the house and turn would-be rescuers into giant bundles of bananas.

Best Way to Ruin a Music Career: Melody gets eaten, piece-by-piece, by a possessed piano.

Best Way to Represent a Delusion: Fantasy, the girl who has a crush on her teacher, thinks the whole time that he’s going to ride in and save her.

Best Art Direction: Check out the gorgeous sunset background painting during the family melodrama part in the beginning.

Best Performance by a Cat: The Aunt’s companion has glowing green eyes and even though a painting of it is the nominal heart of the house, we find out that if you destroy it, that doesn’t necessarily kill the evil.

Best Way to Kill With Comfort: One of the girls gets kilt by a bunch of mattresses and it reminded me of that part in Suspiria where one of the girls falls in the barbed-wire room to an agonizing fate. Except here it’s the leading Japanese pillowtop maker causing suffocating carnage.

Quite the gonzo flick with spurts of animation and vivid fairy-tale vibes. Modern viewers used to intricate effects and real, rather than surreal, imagery might be turned off by what they see in this one, but there’s nothing like it. Three and a half stars.

So the big failure on my part happened during the second cat feature: Uninvited. We had just gotten to the part where the rabid genetically mutated cat decided that George Kennedy’s Achilles tendon was a packet of Tender Vittles when I noticed that it was 11:59, so I had to pause the Blu-ray and get to the New York ball drop to welcome in 2022 and say hasta la vista, baby to 2021.

I got the streaming service to the Times Square celebration right when they started bellowing out “Auld Lang Syne” and moments after the ball came down. Right after. Like five seconds.

Looking back, I should have told everyone that they could’ve waited an hour and then we could livestream the Whiting, Ind., Pierogi Drop on the big screen since it was still New Year’s Eve in the nation’s other time zones, but the shock of everyone else (even the cat) leaving me alone in the nascent hours of 2022 stunned me, even more than the goofy cat attacks or the one scene where the girl who brought the cat aboard ate a whole bunch of bread crumbs to stave off starvation after everyone said the cat had contaminated all the food supplies.

Cheesy 1980s styles. Lost-at-sea subplot. Quint from Jaws imitation. Bulging pus-blood glopola effects. Poorly staged feline mayhem, but not enough of it to keep people invested in it after the crushing disappointment of not seeing the ball drop on Times Square.

Best Durability: The killer mutant cat survives a lab breakout, a hilarious crash-and-burn and being left out at sea, and Frank Drebin’s boss couldn’t even kill it.

Best Way to Write Out Two Characters: One guy decides to jump off the boat after he gets attacked by the cat and develops slime-pus-blood glopola sores and then the girl who likes him tries to stop him and they both end up in the drink. As following prior precedent with Clu Gulager’s character, they don’t bother stopping the boat and they’re never seen again. Maybe the shark from The Last Shark swam in from Italy and got em.

Best Way to Get Those Last Two Establishing Shots After the Budget Runs Out: The shots of the yacht sinking in the storm are obviously a toy boat.

Best Display of Professionalism: Kennedy and Gulager, the familiar marquee names, get in, get attacked, get some fake blood thrown on em and got paid.

One star for Uninvited, and it’s not just because it got me in trouble.

House is available to stream on HBO Max and on the Criterion Channel as well as on physical media from Criterion.

Uninvited is available to stream on TubiTV, the Roku Channel and Plex, as well as on physical media from Vinegar Syndrome.

Check them out, but I’m still mad at Uninvited because it got me a New Year’s night on the couch while the cat got to sleep upstairs.