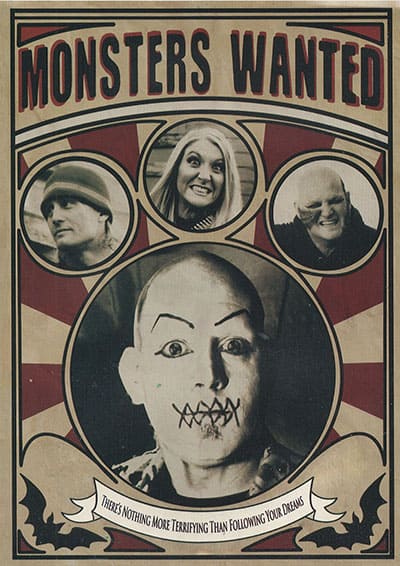 Documentary "Monsters Wanted" is less about working hard to scare viewers and more about showing how scaring people is damn hard work. We see how taking a big chance can be scary as hell as Richard Teachout and Janel Nash work to establish the Asylum Haunted Scream Park in Louisville, Ky., back in 2011.

The scariest moment of Monsters Wanted does not involve the letting of blood, the beefy bald guy named Pete with the redneck drawl swinging a chainsaw around in an enclosed area or the various costumed freaks roaming around in the woods trying to freak everyone out.

To be clear, this documentary is less about working hard to scare viewers — it’s more about showing how scaring people is damn hard work. But that’s not to say there’s no apprehension to be had. Taking a big chance can be scary as hell, and we see just how much so in this scene.

It happens at a cash register in a novelty store. A woman takes out her credit card and hands it over to the clerk to settle a more-than $2,000 bill for assorted supplies, party favors, decorations and stuff to serve hundreds or perhaps thousands of customers who might not ever show up.

She’s on the edge of breakdown, the chance she and her partner have been taking for the past few weeks has seen her and her partner tread the perilous line between financial ruination and seeing a wish fulfilled.

That’s the price of taking a risk and following your dreams. At that moment, she looks close to devastation and absolute exhaustion.

The whole odyssey starts July 2, 2011, in Louisville, Ky. Partners Richard Teachout and Janel Nash are looking to “raise the bar” on haunted attractions there — one of two cities (Cincinnati is credited as the other) establishing the indoor haunted house in the U.S.

They hook up with an attraction run at a paintball place called Darkness Falls but they want to make it bigger, better, scarier.

The single attraction instead will have three additions: Zombie City, Carnivale of Lost Souls and Zombie Hunting. It’ll be called the Asylum Haunted Scream Park. It’ll compete with other more-established attractions, and, ideally, they’ll scare the crap out of people.

But it’s a monumental task.

There are 120 people they need to pay, sets to be built, scares to be planned. There’s the wrangling of the performers, construction, costuming, coordination, dealing with meddlesome guys named Joe who interfere with the layout and stage managers.

The time doesn’t stop. As Richard and Janel approach the September opening, they try to cope with maxed-out credit cards, snap building inspections and the fire inspectors show up. Their whole life savings is sunken into the project. Tempers get raw. It’s a constant scramble.

Assailed by near-constant fatigue and fueled by instant coffee, energy drinks, carbs, nicotine and the fear of failure, they try to turn nothing into something. The work never stops. They begin to pull 20- to 22-hour days when there’s too much work to be done and not enough people to do it.

Just six hours before the first guests are to go through, an electrical problem crops up and some actors leave their posts. Richard and Janel make it through the night, and they do it again, and again. And again.

They get to come back for another year. They made something out of nothing.

As a coda, COVID led to the closure of the Asylum Haunted Scream Park in June of this year after a decade in business. Some of the attraction’s organizers got involved with another attraction called the American Horror Plex. On the announcement of the closure, a comeback wasn’t ruled out — only time will tell, as it does for most things.

But as Brian Cunningham’s documentary shows, a dream deferred is one that absolutely won’t be achieved. It was obvious that the dream didn’t necessarily match up exactly with the ideal of what Richard and Janel wanted to achieve that first year — they didn’t make money, their electricity was shut off, as was their water.

Yet they created something — even expanding into the creation of props for other attractions. The website is www.Asylumprops.com, and they ran the risk of failure, both personal and financial, but Teachout had a great response:

It was a wild ride, with one moment of absolute horror. Not bad for a documentary.

Monsters Wanted is available to stream on Amazon Prime and TubiTV or you can snag the DVD from Amazon.