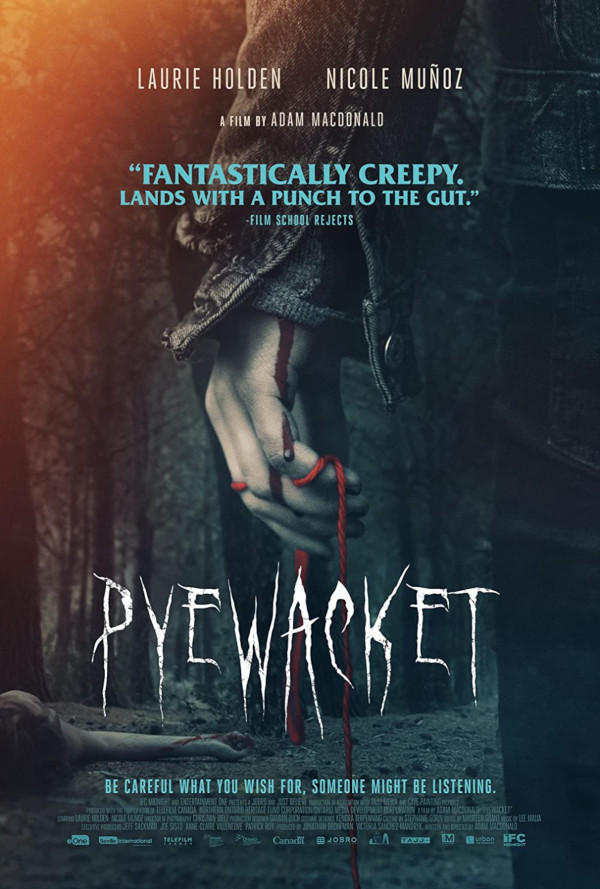 The next trip-into-the-woods flick we’re going to take a look at is Pyewacket, which doesn’t fulfill a bunch of the prior requirements I set forth last week about woods flicks, making me look like a hypocritical goof.

Mostly that’s because the flick doesn’t start in the woods. Instead, we’re in the suburbs where a girl is farting around with her misfit friends in high school and going to book signings by occult authors, but then her widowed mom announces that they’re going to be moving away and she doesn’t wanna go. They just move out to the boonies in the middle of the woods close to a bucolic town that has bucolic and quaint shops where middle-aged moms would like to work.

(That’s probably the first time in my life I’ve ever typed “bucolic” and now I’ve done it three times in two sentences. Doors are being opened here.)

Going back to the standard contents of a woods flick, there is a fire in the forest in Pyewacket, but you have to wait all the way till the end for that. And there’s no camping. And there is cell phone service. No tents, either.

Truly, if I were going to rate this flick by all the other stuff I wrote about woods flicks last week, Pyewacket doesn’t really fit the mold of the peril-in-the-woods flick, which was what The Trees Have Eyes was. But there’s a trip into the woods, stuff happens in the woods and that is the immutable, essential ingredient — wood. You cannot have a proper woods flick without someone being in the woods. It’s right there in the name: woods.

Before folks start sending in emails to me about how I’m irrecoverably blowing a massive hole into the pristine standards I had set just seven days askance, it’ll be OK. I’m making this up as I go along, plus I’ve found two Bigfoot flicks for later this month.

Back to the recap: Leah (Nicole Munoz) is the previously mentioned high school misfit, and she and mom (Laurie Holden, aka Andrea in The Walking Dead if you can remember that far back) have had the man of their house die. Mom’s reminded of Dad whenever she’s in the house, looking at Leah, sitting on a chair, brushing her teeth, flossing her teeth, restocking the refrigerator, at the grocery store, driving her Volkswagen, looking at greeting cards, drinking coffee, lying in bed. Pretty much the works.

Of course, Leah misses Dad, too. But at least she has a close-knit cadre of pierced punker goth types to talk to at school, one of whom is a guy she kind of has a crush on but they’re in that awkward too-chicken-to-say-anything-to-each-other stage. She’s also the possessor of a collection of demon-summoning books and those obviously come into play when Mom says that she needs a change of scenery in order to move on from the death of Dad.

So we get angst from Leah, grief from Mom, they can’t talk it out, and they’re moving.

Leah doesn’t take this very well EVEN THOUGH she gets to keep going to the same school, first by car pool and then by bus. Nope, she HAS TO get the evil supernatural force in the woods involved because Mom’s a big meanie. Beyond being a cautionary reflection of how the teenage mind works. According to writer/director Adam MacDonald, a kid approaching their junior year of high school would rather sic the forces of primal darkness on their sole source of financial support than, you know, actually work out their unresolved emotional problems. He’s probably not wrong. Pyewacket also brings us the following entries in …

Best Precursor of Doom: That scene in the greeting card shop with the one that says “Be careful what you wish for, someone might be listening.”

Best Recipe for Disaster: Pentagrams, milk, hair, red twine and a bowl. Mix it all together and throw some blood in. Boom. It’s like that Milkshake song except for the malevolent demonic forces are coming to the yard instead of boys.

Best Indicator that Leah Wasn’t Paying Attention When They Did First-Aid at School: Her ineffective bandaging technique ruins a perfectly succulent plate of mashed potatoes and delightful green beans. Plus it tips off Mom that she was cutting herself. If you’re trying to do a supernatural assassination of a parental unit, then do the right thing and conceal the huge gouge you took out of your forearm.

Best Way to Suss Out Whether the Fricking Supernatural Spirit From the Woods is Impersonating Your Mom or Not: Call her on the dang phone.

Best Way to Ruin a Friendship: Leah gets blonde goth Janice (Chloe Rose) over for a sleepover and they fart around in the woods with Janice doing a light Blair Witch Project impersonation to mess with Leah. Janice then finds out that the couch isn’t the safest place to be when a supernatural entity is flitting around in the woods and into the house.

Best Stunt Work by Evil Dairy Products: Don’t blink when Leah goes to get some milk from the fridge toward the end to undo her hex.

I’ll give it three stars.

Pyewacket would be a primo double feature with Hellbender, which was featured on Season Four, Week Six of The Last Drive-In in case you are programming Angsty Teen Witch Night as the nights get longer and the trees get barer.

Next week: A director with seven letters in his name who wouldn’t be afraid to fight me if I end up not liking his flick.