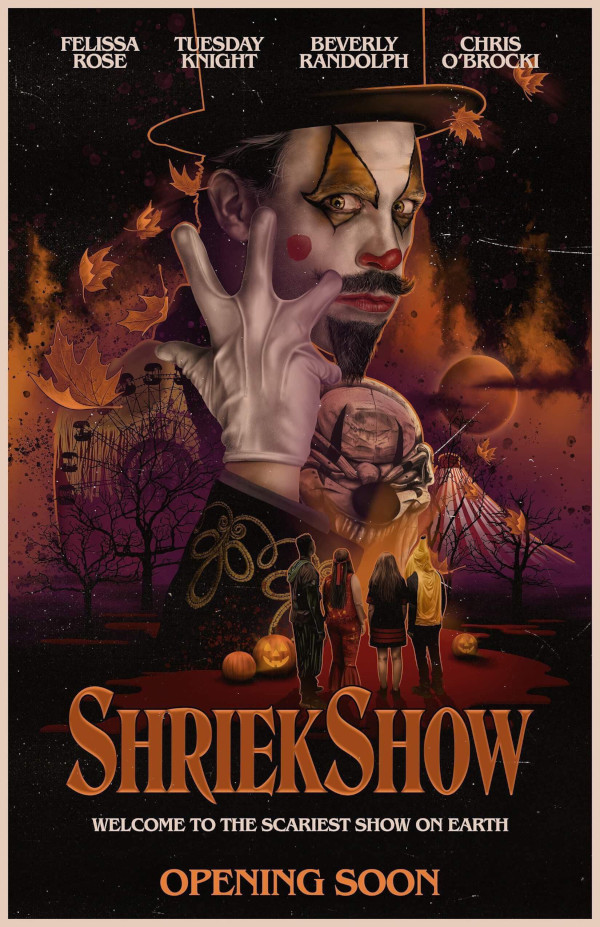 Ben Nagy reviews ‘ShriekShow’: Anthology Features a Bunch of Clowning in the Woods

Director Brad Twigg, the guy behind Killer Campout about the slasher
guy who makes his deadly axe out of street signs (see the review here)
and who’s working on getting the finishing touches completed for
Killer Campout 2, emailed me over the summer telling me that he had
a flick he wanted me to check out.

And while it’s taken me a while, there’s one thing I never want to do,
which is disappoint folks who have taken the time to send in
something for me to check out. Seeing as we are now in autumn and
seeing as the flick he sent me is an anthology with an autumnal tinge,
I figured it was time to get off my posterior to get on my posterior to
watch this anthology called ShriekShow.

The anthology premise is tried and true, dating back to the days of the
1970s Amicus flicks such as the first Tales From the Crypt — just like
a Snickers bar, a milk chocolaty shell story encompasses the peanuts,
nougat and creamy caramel. Except instead of stuff that makes your
dentist scared, it’s stuff intended to make you scared.

In this one, the shell narrative is that there are four young adults —
one dressed like Robin Hood, one in a Jason Voorhees shirt, one in a
banana costume and the other one in a cheerleader outfit are going to
go to a costume party or something similar to celebrate Halloween,
but instead they decide to divert their import sedan to a place where
things are a bit scarier out in the middle of nowhere.

They find a Captain Spaulding looking guy — the Sid Haig one, not the
Groucho Marx one — who’s hanging out in a circus tent in the middle
of the woods, and the guy proceeds to whip out a bunch of artifacts
connected to stories about: 1. Some police officers trying to track
down a serial killer; 2. Some guys who go on a fishing trip that doesn’t
end well; and 3. A boy who had a traumatic experience at a birthday
party when an evil clown showed up. Why? Well, because he can.

In the interim between the tales, the Ringmaster makes things tough
on his audience. And to nobody’s surprise in traditional anthology
manner, things don’t end well for either the folks in the vignettes or in
the shell scenario, especially when we figure out that this Ringmaster
dude has his own cadre of killer clowns (how’s that for alliteration?)
hanging out with him in his creepy canvas cavalcade (oops, I did it
again). How bad does it get for the unfortunate characters? Well, here
are some hints…

Best Substitute for a Placenta: A wounded cop whose guts are
hanging out thanks to a redneck machete attack gets his intestines
chomped by Baby Satan in the first segment.

Second-best Facial: One guy gets a pie in the face, but then there’s
a knife in the pie that stabs him through the skull. Did I tell you these
clowns are nuts?

Best Not Pee in the Woods: One of the guys on this fishing trip in
the second segment drinks an entire $60 bottle of scotch so he doesn’t
notice that he’s peeing on a human skull.

Best Not Pee in the Woods (Again): One of the guys in the
connecting segment leaves his girlfriend to go pee in the woods so he
doesn’t notice the little clown with the blade as tall as he is coming up
behind him.

Best Action Figure Cameo: The protagonist of the third segment
has a Rocky III Thunderlips figure.

Best Fulci Homage: The final kill of the flick is reminiscent of that
one scene in City of the Living Dead (aka Gates of Hell) where the evil
priest who I always thought kind of resembled Jeffrey Tambor from
Arrested Development looks at the girl in the car and her eyes start
bleeding and then she barfs all of her guts out while the guy who wore
the silver mask and handed out the movie tickets in the original
Demoni looks on.

My biggest issue with the flick was that the cinematography choice of
shooting in this drab gray with spot color to mimic night in the last
segment really took down the visual potential of the clowns’ final
pursuit of the last two survivors in the connecting segment. Portions
of the chase ended up being too dark when it might have actually
looked better with the autumnal color scheme of the harvest
contrasting with the multiple colors of the evil clowns.

That begin said, ShriekShow has blood, it has breasts and it has beasts
— ergo two stars — the baseline standard for a drive-in flick fit for
Halloween viewing.

Check it out on Plex, Amazon Prime or snag the physical media
versions from Fuzzy Monkey’s online store on kunaki.com.