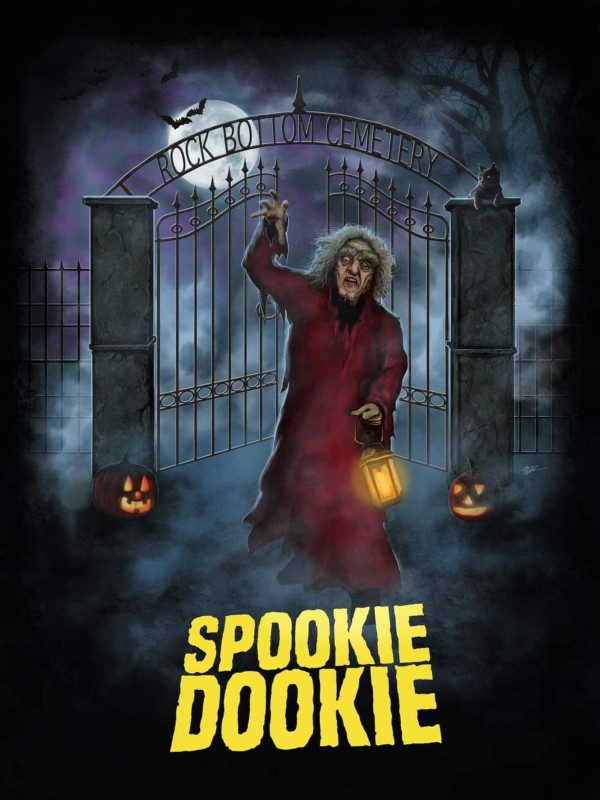 Brian Papandrea, the all-time indy filmmaking shrimp cocktail king (see The Big F, if you don’t believe me) has churned out another flick from his Rock Bottom Films company with a title that could describe what happens about an hour after someone follows up eating four bowls of Boo Berry cereal for breakfast with a chaser trip to Taco Bell for a couple Mexican pizzas and three newly reborn Enchiritos.

Spookie Dookie made its world premiere at my hometown con — the Cinema Wasteland in Strongsville, Ohio, (twice a year in October and April for going on three decades) — but I suck because I wasn’t there to see it and so will doubtlessly incur eternal shame from the Cleveburg mutants for not being there this round.

But reviewer’s personal failures aside, Papandrea plays something like eight characters in this project (order now if you want to get it by Oct. 31), which has absolutely no plot to get in the way of the vignettes. There are a couple of running gags that occur in multiple spots of the just-over-an-hour runtime involving Papandrea’s Dracula by way of George Hamilton and the Gatekeeper, a fidgety decayed dude who runs around a cemetery in a red tablecloth, who is just looking with his one good eye for someone to hear his stories. The Gatekeeper bounces around to serve as the connective tissue for the first few segments. Papandrea plays him, too.

I kid you not, Papandrea played like 16 characters in Spookie Dookie, wrote and directed this flick that’s more a horror-themed sketch comedy TV episode rather than a movie — think You Can’t Do That on Television in the 1980s, The State in the 1990s, Mad TV in the 2000s, etc., etc., except horror-related and more along the lines of something Troma would do.

Anyhoo, back to the Gatekeeper, one of the 32 characters Papandrea played while exuding a manic energy that reminded me of the classic horror host the Ghoul who ruled late nights in Cleveland and Detroit in the 1970s and early 1980s. The Gatekeeper exudes a lot more later when he finally entices an unfortunate guy into his crypt who’s expecting a werewolf story, but I’m not going to spoil the gag.

The other brief vignettes feature Papandrea playing 64 characters and a bunch of other regular faces from Rock Bottom’s other productions such as the Big F mentioned above and Feaster Sunday, which I reviewed earlier this year. A rundown is as follows:

Best Courage in the Eye of Adversity: Actor Terence Cover, in his usual Rock Bottom role as Terence, the guy who gets a faceful of trauma when visiting the Gatekeeper’s lair and comes to a realization on how his host may have lost his eye.

Best Throw to a Commercial: O.J. Simpson (Papandrea) as a guest of Rittenhouse, who says “Stay white there, I’ll be black after these messages.”

Best Reference to an Element While Writhing on the Floor: Mabel, Pastor John’s incapacitated wife, who groans, “Ooooooooooooh magnesium.”

Best Expression of Ingratitude: Rittenhouse declines his mom’s offer of pizza rolls, a Hot Pocket or a pizza bagel. He wants a grilled cheese with ham and no tomato.

Best Tip to Get Away With Murder: “Be white,” Rittenhouse says.

Second-best Tip to Get Away With Murder: “O.J.” says run away because innocent people don’t turn themselves in, and to be rich or famous.

Best Dramatic Indictment, Complete with Frothing Spittle: Pastor John rips Dracula a new one — “You could have saved my darling wife but instead you chose to ignore her pain out of selfishness.” In Dracula’s defense, it was probably daytime and he couldn’t go out to assist, even had he wanted to.

Best Excuse for a Guy’s Crummy Photography: The art snob host interprets Deo’s crummy photo compositions — “It’s almost as if you are saying, this is what could’ve been, but this is what you’re getting.”

Best Sculpture: James Bell’s prosthetic created for the Gatekeeper would be a treasured gift for Felissa Rose.

Best Display of Invincibility: Pummeling “Freddy” with a stuffed animal has no effect.

Having played a world-record 1,024 roles in Spookie Dookie, you have to admire the energy and stamina of Papandrea to get another Rock Bottom project off the ground and burned to disk. If forced to choose, my favorite segment was the Coffee Joe one, which ground up just the right aroma of parody, comedy, atmosphere and torture.

Spookie Dookie gets two and a half stars — grab it from Rock Bottom Video’s web store — and check it out for some Halloween chuckles.