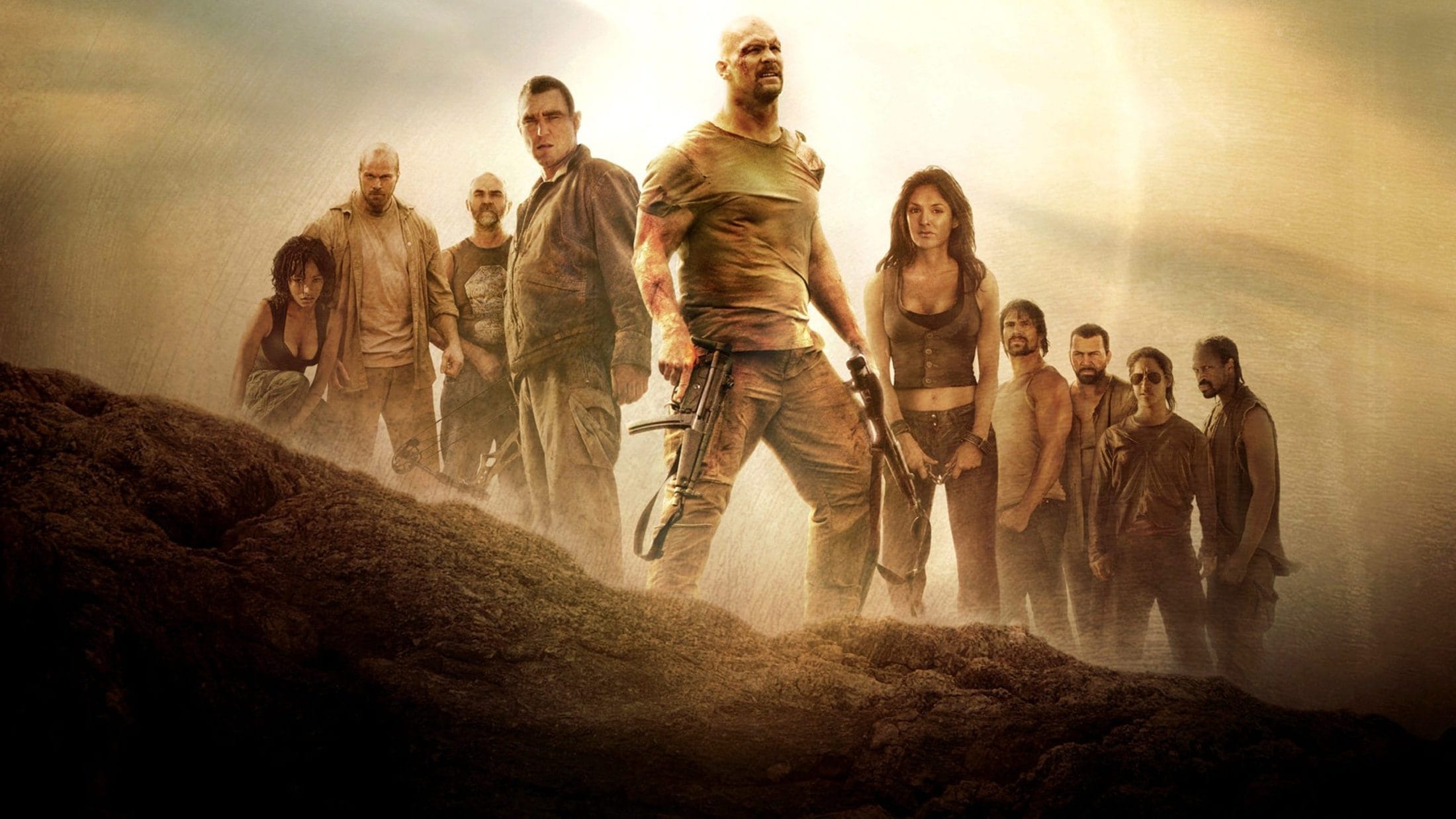 Ben Nagy Reviews ‘The Condemned’: More than a decade ahead of ‘Fortnite,’ Steve Austin Got a Victory Royale

Champion pro wrestler "Stone Cold" Steve Austin made the move to starring in movies back in 2007 with the action flick "The Condemned," where a bunch of people battle to the death on an island. Reviewer Ben Nagy wonders if this one heavily inspired the popular video game "Fortnite."

It’s 3:16 Day for those uninitiated in the minutiae of late 1990s-early 2000s pro wrestling. The significance being that a certain bald guy from Victoria, Texas, is likely to break through some plate glass while wearing a black T-shirt or a vest with a skull on it, open a can of beer, beat the heck out of the nearest billionaire with a bedpan and whoop some butt.

We’re talking one of the top five pro wrestlers of all time. We’re talking the Texas Rattlesnake his own self.

(No, he was not nicknamed after the Brian Bosworth-starring biker flick that Joe Bob gave four stars to back in 1991. And no, it’s just a coincidence that he has the same name as Lee Majors’ character in The Six-Million-Dollar Man).

Austin was a multi-time world heavyweight champion in the WWE (then WWF) starting in 1998, sold shiploads of T-shirts that said “Austin 3:16” because of a famous promo he cut on Jake “The Snake” Roberts during the 1996 King of the Ring, and then had to retire prematurely from in-ring matches because of assorted injuries in the early 2000s — banged-up knees and a chronic neck injury cut his career short.

Following the lead of other major wrestling stars of the prior 1980s generation like Hulk Hogan and the revered-by-Drive-In-Mutants-everywhere “Rowdy” Roddy Piper, Austin turned his eyes to doing some TV and then some movies since he couldn’t wrestle full-time anymore without risking his health. At about the same time, his in-ring rival, Dwayne “The Rock” Johnson, also made the jump to movies, and while Austin might have been the more popular and more successful wrestler during the famous “Attitude Era” of WWE wrestling, Johnson ended up far surpassing Austin when it comes to box-office grosses and roles.

It didn’t help that some legal issues surrounding allegations of domestic violence hampered Austin as well. He had to wait about four years between ending his regular in-ring gig to getting his first starring vehicle while the Rock was starring in a bunch of flicks pretty much the minute he decided to do movies.

But since we Mutants are not concerned about bankability and box office returns and since it is Stone Cold Day, let’s look at The Condemned, which (unsurprisingly) a bunch of critics hated, didn’t make a lot of money for WWE Films and was considered a bomb.

Let’s take note: Movies that BOMB at the box office simply might have bombed because they were too far ahead of their time. The Thing, Blade Runner and a bunch of other flicks now looked at as deserving of classic status either were hated or ignored at the time because people were looking only at the bottom line of grosses or so-called “critical acclaim.”

The Condemned is one of those movies.

The Condemned might not have made tons of money and did not catapult Stone Cold into the crossover Hollywood star The Rock became. (Stone Cold’s most widely seen role was probably getting his hench on in The Expendibles)

But The Condemned did do something else.

Fortnite is this game that my sixth-grade son plays all the time when he’s not grounded for committing crimes of annoyance against his younger sister. The basics are these – 100 players are dropped on this island, they stalk and kill each other by using weapons. Supplies are dropped from the sky to assist the players. One player (or team if you are playing with others) wins after all the other players are eliminated. There are videos about it on YouTube. It was created in 2017.

The Condemned was what I watched last Friday night. The basics are these — death-row convicts are dropped on this island, they stalk and kill each other by using weapons. Supplies are dropped from the sky to assist them as they fight for survival. One death-row convict wins after all the other players are eliminated. The whole thing is streamed live over the web. It was released in 2007.

In fact, my son got so mad at me for noticing that Fortnite bore such a striking similarity to the nearly 14-year-old movie I was watching that he stormed out of the room, went into the basement and started streaming a whole bunch of Fortnite videos on YouTube done by 14-year-olds.

Granted, The Condemned’s plot is partially The Most Dangerous Game, that classic almost-century-old 1924 short story by Richard Connell that used to be taught in junior high English. In that one, this rich hunter bored of hunting wild animals rounds up a bunch of people to his private island where he could kill them because people are the most dangerous creatures to hunt. It’s inspired a ton of flicks in the intervening 97 years since its publication, some of the most recent being last year’s The Hunt and Tremors: Shrieker Island.

In The Condemned, the rich guy Breckel (Robert Mammone, Matrix: Reloaded and Matrix: Revolutions) hires a bunch of people to wire up the island with cameras and then pays for the release of 10 death-row inmates so they can do the whole Highlander “There can be only one” thing for 30 hours, with the survivor winning freedom and a paycheck. To motivate them, the criminals have these anklets that’ll blow up if tampered with or if a key tag on the anklet is removed. Breckel sets up a website (YouTube wasn’t that big of a deal yet in 2007), charges $49.99 a pop and wants to get 45 million viewers so he can say he had as many viewers as the Super Bowl, muhahahahaha. In order to gain the most viewers globally, there’s a multinational collection of inmates: a German, a Russian, an African woman, an Italian, a guy from Japan, a Mexican husband and his wife, a British guy and an American.

But Breckel is short a participant because the guy from the Middle East he was going to get to draw Islamic viewers died en route, so he stages a fight among condemned inmates in a prison in El Salvador for a replacement. Jack Riley (Stone Cold), a retired American military man, wins the fight, his release is purchased and he’s flown to the island.

The 10 condemned inmates are dropped on the island. They battle. Some die. We get …

• Best Verification of Newton’s Law (or, in Fortnite terms, taking the L): The first kill of the show is when the Italian contestant, Dominic, is chucked out of a chopper and gets impaled on a crag before getting his chance to kill folks.

• Best Attitude (or, in Fortnite terms, emoting): When the guards go to get Stone Cold and his first line is “Tell the warden to go f— himself,” and then during a face-off with an enemy he says “Sounds like you’ve had a hard life. Good thing that it’s over.”

• Best Villainy (or, in Fortnite terms, the NPC boss): Breckel says “We have to improvise, adapt and overcome,” and “I don’t want a Guatemalan, I already have two Mexicans,” and “You wait until blogs and chat rooms get ahold of this thing. The Internet is wildfire.”

• Best Creep (or, in Fortnite terms, the Try-Hard): Ewan (Vinnie Jones) creates an alliance, hoards all the weapons, rapes a woman in front of her husband, shoots the same guy with arrows and then sets his on fire. He chucks Stone Cold down a cliff, kills a camera crew and then goes on a gun rampage at the production HQ as well.

• Best Crew Money Can Buy (or, in Fortnite terms, the squad): Breckel has a Bluetooth headset guy for security, a tech guy, a producer guy, a nerdy girl with glasses and a blonde with a conscience and an accent. Guess which survives?

• Second-best Wrestler in the Flick (or, in Fortnite terms, the Sweat): Nathan Jones (Mad Max: Fury Road, Boar) plays Petr, a guy who kicks the heck out of a bunch of people in a Belarus prison, then gets kicked in the crotch a bunch of times by Stone Cold before getting suplexed off a cliff and exploding to boot.

• Best Impersonation of SCTV’s Farm Film Report (or, in Fortnite terms, sploding): Half of the killers on the island get blowed up real good.

Three and a half stars (no breasts).

WWE Films made a sequel called The Condemned 2. It stars Randy Orton. He’s not Stone Cold. That’s the bottom line.

Check out The Condemned streaming for free on Peacock TV. It’s also available on DVD and Blu-ray.