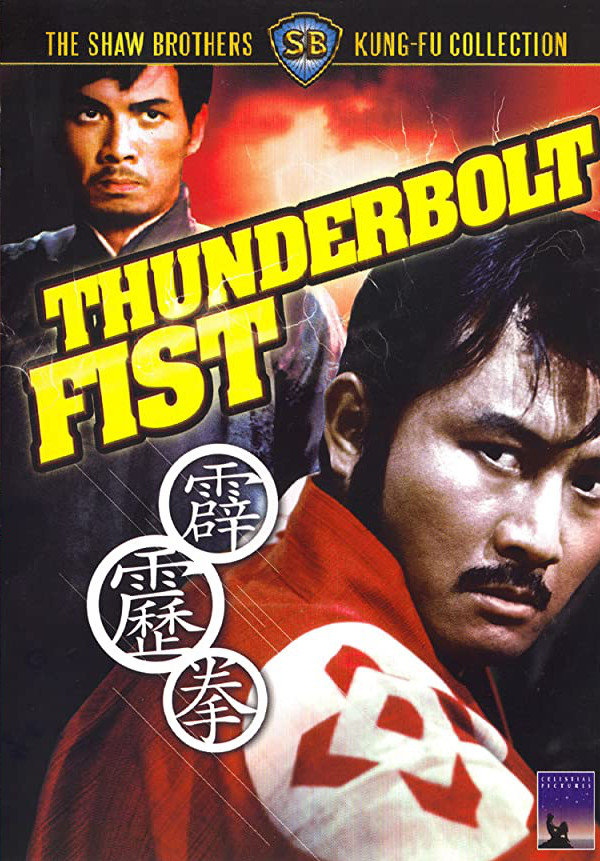 One of the toughest kind of flicks to review is the kung fu flick and that’s because Bruce Lee went and wrecked the curve back in 1973 when he did Enter the Dragon.

It was such a cultural touchstone that a cottage industry even sprouted up in the mid- to late 1970s of just movies that feature Bruce Lee imitators or “clones” (Joe Bob ranted about it during the break after the infamous “Bad chop suey” scene in Pieces, and I reviewed one of these flicks a while back).

Open up a 1970s Marvel comic book and you’ll see ads for martial arts weapons and instructive literature from the mysterious and allegedly lethal Count Dante. In the 1980s, there were martial arts and karate studios popping up in suburban U.S. strip malls because the reverence for Bruce morphed into Ninja Madness. The tragedy of Bruce’s untimely death and the whole mystique of What Could Have Been no doubt fueled the interest in kung fu and sundry other martial arts, both real and imagined, worldwide. Poor Jackie Chan got painted with the brush of being anointed the next Bruce Lee after breaking Bruce’s box-office records back East, but flicks like Battle Creek Brawl and a cameo in Cannonball Run didn’t propel him to the level of stardom Bruce attained out West. Jackie went back East, honed his skills to become Jackie Flippin Chan, and then finally broke through out West in the mid-1990s on his own merits when Rumble in the Bronx caught some mainstream attention.

But until Jackie finally ascended to becoming a non-Ninja kung fu hero in America (To note: After Jackie’s first attempt at U.S. stardom flamed out, Joe Bob was pulling for Sho Kosugi — the star of Cannon Films’ Ninja flicks and the brutal classic Pray For Death as a successor to Bruce), there were a lot of flicks pre-Bruce and post-Bruce and none of them topped Enter the Dragon in importance and influence in the history of kung fu movies.

That’s both a blessing and an obstacle, because as a reviewer, you want to try to be consistent and get readers a sufficient baseline of quality for every flick that you look at. A movie that gets two stars, at minimum, has to have the three Bs. If it doesn’t, the flick has to do something else really well to make up for the absence of one of the Bs. But, if it has the 3 Bs, but then it gets boring (the ULTIMATE SIN for a flick), then it’ll get below two stars. Enter the Dragon is no doubt four stars now and forever, and that’s also a really, really tough bar to equal when you’re looking at the chopsocky side of things.

All that being said, the flick I’m reviewing this week, Thunderbolt Fist, is a Shaw Brothers project that came out in 1971, well before Enter the Dragon, and uses standard Kung Fu Revenge Plot Numero Uno: You killed my mentor, so now I have to train for 10 or so years before I can enact my revenge.

In this one, some nasty Japanese ruffians are ransacking, extorting and tormenting the citizens of a town, tearing up shops, stealing the local ginseng peddlers’ product and then chopping off the hands of old guys for gits and shiggles. The mayor of the town wants to pull a Neville Chamberlain and acquiesce with the thugs. Gin Chi, the brother of the local master, flees to the mountains with a bunch of people because he’s sick of the mayor being a wimp. Meanwhile, local master Ping Bai steps up and challenges the head Japanese thug in the ring that the hoodlums have set up just outside of town for the occasional death match or two in times just like these.

Ping kills the heck out of the lead thug in the ring, but it’s a brutal battle, and he ends up having to go to the local managed care facility to get his wounds tended. While Ping exits the hospital that night, some of the sorer-loser gang members descend upon him, his son, Tie Wa, and Ping’s faithful old manservant.

Tie Wa flees to the cave where his uncle went and established a primo underground rebel kung-fu training facility, but not before seeing his dad get chopped to ribbons while trying to fight off like 14 guys with samurai swords out in the street and in their home. Tie Wa stashes an heirloom kung-fu manual with the Thunderbolt Fist technique at a girl named Feng Niou’s house, promises to come back someday, then hightails it out of there to begin the requisite train-your-hiney-off period necessary to prepare to even the score and take back the village.

All this plot happens in the first six minutes, and before you can look up how to say ‘My name is Inigo Montoya, prepare to die,” in Mandarin, Tie Wa is training in the secret kung-fu cave lair with his cousin, Die Er, no slouch when it comes to fighting, and getting his butt kicked for 10 years straight by a girl before he turns 18 and his uncle says he can go ahead and check out what nonsense the insolent criminal occupiers are pulling in town.

The passage of a decade also allows for Gu Gang, the son of the original Japanese thug leader that Tie Wa’s dad killed, to grow up, get a pretty sweet-looking and stylish red gi and learn all of the techniques needed to terrorize the townspeople and run a brutal criminal enterprise with little to no resistance. To make things even more complex, Feng, the girl Tie Wa was sweet on and who is holding his book, gets married to a friend of his, creating a love triangle subplot and some hard feelings upon Tie Wa’s return to challenge the baddies. Also, his cousin is running around on the rooftops using her ninja powers to steal from the criminals and give back to the poor.

Typical hero’s journey ensues with continued ransackings, kung-fu mob battles, deaths of folks close to Tie Wa and then the final mobilization where he tries to finish off what his dad started a long time ago by trying to expel the domineering gang with the help of his uncle and cousin.

Best Bad Guy: Gu Gang acts nice to some local ginseng peddlers, but doesn’t want to pay them — “Let them be happy first, then kill them,” he instructs his underlings. Earlier, he beats the heck out of eight of his students because he can.

Best Style: Tie Wa whistles a lot and cracks his knuckles during a one-on-eight battle.

Best Friend’s Girl (But She Used to be Mine): Feng volunteers to give herself to Gu Gang in exchange for Tie Wa’s freedom.

Best Excuse to Fight the Rest of the Flick With One Arm in Your Coat: Tie Wa gets captured and tortured by the Japanese, his shoulder gets busted up and one hand fried. This inspires him to actually read the Thunderbolt Fist manual and gain the mystical technique to use against the enemy.

Best Just Ignore the Inconsistency: After learning the Thunderbolt Fist technique, Tie Wa has the ability to kick trees in half.

Best Battle: The last ones, of course, where Tie Wa, his uncle and his cousin ride back into town and we get some Sergio Leone eyeball zoom-ins and then Tie Wa knows the Thunderbolt Punch so he can fight Gu Gang and four guys with blades in their shoes in the ring at the end.

Best Sums It Up: The last line — “I owe to your encouragement, I say.”

Decent action and a good flick to put on if you want some vintage Kung Fu Theater action on a Saturday afternoon. Three stars.

Thunderbolt Fist is available to rent streaming on Apple TV, Google Play and on physical media.

Check it out, and I owe to your encouragement that I’ll have another flick review for you next week.