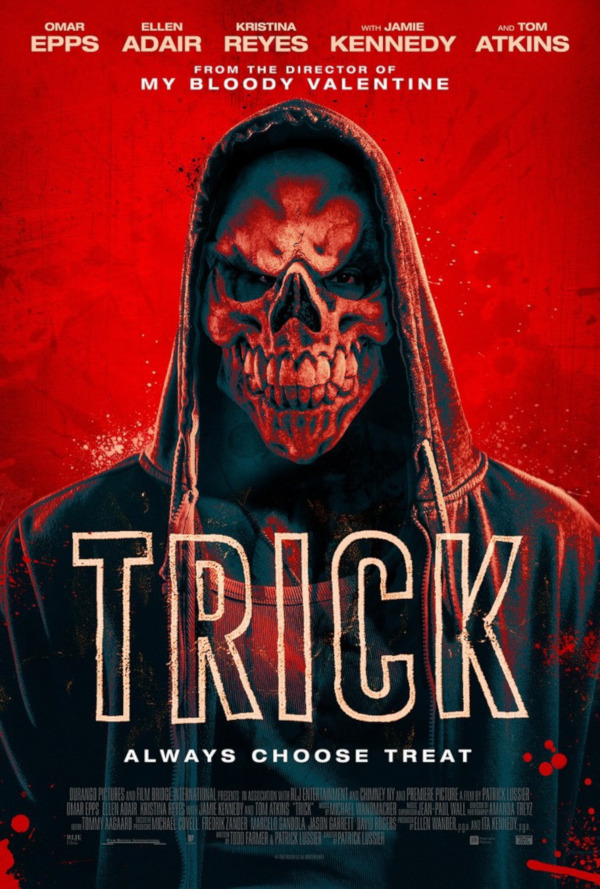 Ben Nagy reviews ‘Trick’: It’s what comes before ‘or’ and ‘treat’

This flick, Trick, starts with a definition.

You know what starts with definitions? Middle school oral reports. A lecture in front of the Kiwanis Club. Graduation speeches. The sermon at church on a weekend when the lector just doesn’t have a good one in em but still has to say something to fill the time.

So starting a slasher horror flick with a definition as the first thing folks see is an unconventional way to do things to say the least. It sets the table for what ends up being a pretty conventional cops vs. killer flick from writer Todd Farmer (Jason X, My Bloody Valentine 3D). It’s not quite rote — there’s actually a decent zigzag near the end that makes all the things that look like plot holes make complete sense when it all comes out in the wash.

After we get past the definition screen, we end up hanging out with a bunch of teenagers in 2015 Benton, N.Y., who are at a Halloween party and instead of playing “spin the bottle,” because, let’s face it, finding a glass Coke bottle is a bit tougher thing to do these days unless your local big box store carries Mexican Coke, they’re playing the more seasonally appropriate “spin the really sharp knife on the pentagram.”

And while is a nice touch, the geniuses of Benton High didn’t really think it through, cause it allows this person in a pumpkin mask named “Trick” Weaver, short for Patrick, to grab a knife and go Ghostface on people (the knife makes that swishy, steely brandishing sound from Scream) when he starts stabbing everybody at the party rather than kiss this dude because that’s where the knife stopped when he spun it.

So he kills five people at the party, gets impaled with a metal poker and then hauled off to the hospital where Jamie Kennedy is the head physician. He somehow gets himself loose of his cuffs, slashing a cop in his face with them, then grabs a surgical saw and kills some more people, so about eight folks get offed in the first 12 minutes. Then he gets shot five times, falls 23 feet out of a window and disappears into the river, but then the killings go on.

Halloween 2017 — another massacre mentioned — Hudson Village and is wearing a skull mask. Don’t see much of this one.

Oct. 30, 2018 — Shady Creek, N.Y., Trick starts by attacking a cop in a bar bathroom, then rigging up this brick load that eventually decapitates him outside and the Road Warrior flying finger thing happens to a female cop who’s there, then she dies and there seems to be some teleportation involved. And the cop’s head falls off twice but then it’s somehow reattached in the final transition shot…

There are a couple of really familiar names to horror flick fans — 2022 Lifetime Achievement Hubbie Award winner Tom Atkins and Kennedy (Scream) — who play supporting roles, but the real main characters are Cindy (Kristina Reyes), a survivor of the instigating massacre, FBI agent Mike Denver (Omar Epps), who’s been on the case since the start, and Sheriff Lisa Jayne (Ellen Adair).

Epps is the Loomis-adjacent character who is in dogged pursuit, Sheriff Jayne is the sheriff who is actually cooperative and collaborative with Denver. Neither of them shout that they shot Trick six times in a British accent back in the day at the hospital, but they sure do talk about it a lot in between bouts of jealously talking about how viral and how many followers the hoodie-wearing killer has on the internet.

Now it’s 2019. Some survivors of the first rampage have come back to Benton, and so has Trick. The body count slows a bit because director Patrick Lussier (My Bloody Valentine 3D, the Dracula 2000 flicks) decided we actually had to have some character development. After that sanguinary start, there aren’t really any inventive executions (pun intended) other than stab, repeat, as the flick progresses. Still, definitely enough for …

Best Reminders of the Importance of Freight Rail to the American Supply Chain: There are at least three random scenes with trains in em.

Best Head Trauma: Tombstone to the cranium via a dock crane.

Best Continuity Error: The detached-reattached head thing that happens to the guy that gets his head pulled off by this Rube Goldberg contraption.

Second-best Continuity Error: Whether Denver is a police detective or an FBI agent is kind of murky.

Best Durability: Denver gets stabbed eight times and makes it pretty far into the flick, better than Epps did in Scream 2, for sure.

Second-best Durability: Sheriff Jayne gets stabbed about four times and slashed really badly on her face.

Best Example of a Small-Town Entrepreneur: Atkins’ character Talbott owns the town diner and has the wherewithal to put on a huge Halloween bash with a corn maze on the property he owns AND he owns a deconsecrated church where he’s showing, what else, the original Night of the Living Dead. When he sees this guy Troy and his folks try to sneak in, he threatens them with a shotgun and says, “You and your S—head Five can make a healthy donation to tonight’s cause.”

Best Mystery: Why in the heck did Trick steal Tom Atkins’ barn door? Because he was playing a trick is not an acceptable answer.

Best 1980s Flick References: There’s a Killer Klowns From Outer Space mask and a pretty obvious Motel Hell reference among the corn maze workers. A cop loses all her fingers on one hand as well, but I’m not sure whether to count that as a Road Warrior reference or not.

Two and a half stars. Lots of dead bodies, but no garbonzas, so the half-star deduction is in effect.

Check it out on Roku, for rent on Apple TV and elsewhere and on physical media.