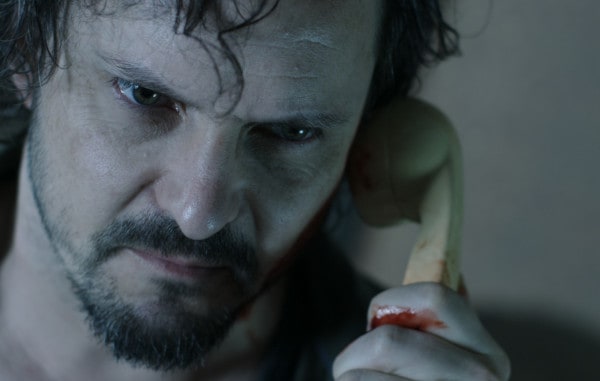 In what proves to be an experience that scars his son for life, a scientist who is doing some research in remote viewing takes his child to work one day in the early 1990s and finds out that there are monsters trying to invade our world in The Dark Within.

Years pass, and the echoes of the day when Marcus (Paul Flannery) was left orphaned — his mom and dad are described as missing — still reverberate. A steady relationship with his ex, Sarah, has collapsed with a restraining order being obtained against him, and Marcus has been receiving therapy to come to terms with the mess that his life has become. (He’s apparently an artist, though that’s not quite clear). In addition, his greatest artistic creation has as a focal point this skull-headed creature that he drew as a kid on take-Marcus-to-science-lab day and he doesn’t know quite why since his memory’s repressed.

Of course, the next logical step, his therapist suggests, is for him to head out to his parents’ cabin out in the boonies that he hasn’t visited in the decades since they disappeared, and she just so happens to have obtained the key to said cabin from a trust that had been established for him.

From there on out, director-co-writer David Ryan Keith (Flannery also co-wrote) adds layer upon layer of chronological and dimensional muckery as Marcus’s stay in the cabin provides ample chance for wandering in the dark, hallucinations and lost time. The best advice is given by the benevolent voice of his mother who, rightly so, tells Marcus not to believe what he sees.

There are a couple weaknesses in the story. Papa Scientist must have had some pull to locate the site of his experiments where it was, if indeed it was a shadowy government-sanctioned experiment (one of the volunteers early on appears to be wearing a military outfit of some kind). Also, the interdimensional threat, while creepy with a sort of They Live-meets-Baby Huey appearance, never really kills anyone that we see though it sure likes to mess with poor Marcus’s head, which is kind of the point. The poor guy is stuck between dreams and reality, sees ghosts and in general can’t distinguish between what’s real and what isn’t. It’s unsettling, non-linear and psychological.

We finally get some flashbacks that fill in the blanks of what happened to Marcus’s folks — which was the whole point of the journey to the cabin — as the flick winds down, and the recursive conclusion of the last shot shows us that the cabin might not be where we thought it was and that a sizable chunk of what we saw also might have taken place at a more cerebral level. However, those last few seconds of run-time might leave some members of the audience feeling somewhat cheated.

Still, we have a well-shot (barring one scene in the woods that was way too dark) solo freakout in a cabin courtesy of Flannery and director Keith, reminiscent of when Bruce Campbell goes crazy in the cabin in “Evil Dead 2,” and some good blood effects. While the body count and gore might not achieve the level of that Sam Raimi classic, The Dark Within does prove that you gotta stay on your toes because those creeps from another dimension are devious bastards who want to get in, that is, if they aren’t already here.

That and don’t take your kid to work. Your yard monster might attract a literal one.

Check out The Dark Within on YouTube, Amazon Prime Video, Google Play and Vudu for $3.99.