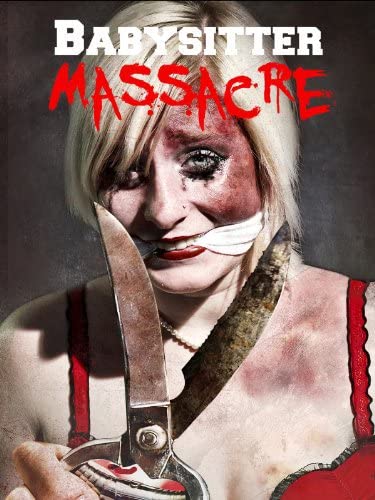 As has been already documented in numerous places by folks in equal measures more eloquent and more verbose than I, there is no profession more prone to suffering in the annals of horror flicks than the much maligned and mutilated babysitter.

We’ve checked out a couple sitter-in-peril flicks previously with The Night Sitter and The Sitter, and any horror fan worth their salt knows that before John Carpenter’s Halloween was Halloween, its original script title was The Babysitter Murders, but gears were switched, the holiday setting added and that flick basically launched the multi-billion-dollar industry for scary Halloween stuff. (Joe Bob went into this during his intro rant in the Halloween Hoedown special, still streaming on-demand on Shudder.) The rule of thumb established is that the responsible sitters who are actually good at their job for the most part get to make it as a Final Girl, while in contrast, the parents of the ones who eschew their duties for the nookie or the doobie better have had life insurance policies taken out and paid up because the bad sitters usually check out from 35 to 75 minutes into the flick. Nothing new to see here.

This week’s flick is yet another entry in the horror filmic subgenre (JBB’s gonna kill me for using a French word and putting it on his website) that proves once again that babysitting as a horror film occupation is more dangerous than juggling chainsaws, hauling nitroglycerin cross country in a trailer with questionable braking power, trusting a near-sighted urologist with uncorrected vision with your vasectomy or talking back to your mom.

Babysitter Massacre from 2013 not only has some sitters in the fictional town of Ray Falls, Ohio, getting themselves sliced, diced, and sacrificed, but it is perfect for Halloween because it takes place on Halloween. The guy who wrote and directed it is Ohio’s own Henrique Couto (not to be confused with the head mutant in Total Recall), and if you meet him at a convention, you’ll find out the following about this indy filmmaker:

Numero Uno: He’s from the Dayton area, the place that brought us Deadbeat by Dawn .

Numero Two-o: He is in the running for the greatest facial hair in Ohio.

After meeting him at the Drive-In Jamboree at the Mahoning D.I.  in July, Henrique passed me a Blu-ray of this flick, and since the calendar tells me it’s October and Babysitter Massacre takes place in October, welp — no time like the present.

But before I get really into looking at the flick, a way to earn INSTANT respect from both myself as a critic and, I suspect, most Mutants as an audience is when the filmmakers just go ahead and deliver on a promise. If a flick’s title or its advertising promises you something to entice you to fork over the cash to watch it, the minimum the filmmakers or advertisers should do is fulfill it. It’s why the marketing for Pieces, the closer for the original Last Drive-In marathon way back when, is so inspiring. If you remember (or just Google the you-know-what-er), the poster has a chainsaw on it, a blood-red border and features the stitched-up corpse the psycho in the flick is assembling from the pieces he’s gathered. And then it says right under the title “It’s exactly what you think it is!” on the poster.

That is what you call integrity and truth in marketing. You’re probably not going to get that much these days anywhere anyhow — in Hollywood you get spoilerific trailers, lazy poster design and that one sound effect that goes “beeeeeew” to indicate slow motion. But Henrique has that Midwestern integrity to go with his awe-inspiring mustache, and Babysitter Massacre has truth in marketing, Two minutes into the flick, Linda the babysitter (Odette Despairr) sends the girl she’s watching to bed, takes a bath, gets the Drew Barrymore Scream treatment by being harassed via text message, is abducted by a masked nutso, tied to a chair and thrown into a basement while nekkid before the creep gets an implement that’s a cross between hand pruners and industrial scissors and does her in.

Before the title card, the three Bs are taken care of, it’s four minutes in, and the flick already has two stars in the bank. Told you Mr. Couto was one of us.

Then stuff slows down. A girl named April Walker is missing, declared dead and her friend and neighbor, Angela (Erin R. Ryan), visits Mr. Walker (Geoff Burkman), April’s forlorn dad. Then, another shower scene before we get the setup that Angela and a group of former babysitters are going to have a slumber party for old time’s sake on Halloween night at Angela’s house.

The flick’s at its best when the camera gets moving. Rather than the interchange of dialogue, we get some pursuit when Bianca (Marylee Osborne), the ostracized member of the group blamed for April’s death because she was trick-or-treating with her when she disappeared, sees the killer at a party downtown and tries to go after him. But, as all much-lower-budget indy flicks have to do with their smaller crews and limited production resources, there are some static, dialogue-heavy scenes in spots. And the special effects during the kills are the classic shot-of-weapon-approaching-victim, cut to blood on body, corpse falls and then we get to see some gnarly make-up effects on the corpse.

But where Babysitter Massacre sometime lacks in elaborate gore (the face-boiling scene and the hammering scene are pretty graphic), it makes up for in quantity. The killer gets around, stalking houses, parties and the woods to produce a decent body count. There are a couple nice homages to classics such as the original Texas Chainsaw Massacre and the Omen, and the character with the most development and most-interesting story arc is surprisingly not the one that we’ve been automatically conditioned to embrace through Black Christmas, Halloween and a litany of subsequent slashers, as the heroine, but rather Bianca, the bisexual outcast who’s been suffering emotionally and socially ever since her friend from the babysitters’ club went missing.

And while the perpetrator of all the carnage is not a surprise, the brutality of the last few minutes of this one and its conclusion does not follow convention, which brings us to …

Best Way to Deter Folks from Booking Manicures: What happens to initial victim Linda’s left hand after she’s chucked into the killer’s cellar.

Best Authenticity: The original Halloween from 1978 famously has trees with green leaves and the crew had to throw leaves around to simulate how the foliage looks in Illinois on Oct. 31. (A palm tree or two snuck into some shots as well.) In this one, the fallen leaves on the ground are real, you can see snow flurries, and Angela’s shivering her butt off in her initial conversation with Mr. Walker.

Best Way to Get Characters in Lingerie: Blonde Arlene (Tara Clark) finds a box filled with naughty undies, thinks its from her boyfriend and implores Lucky (Joni Durian) and Angela to dress up so they could re-create her favorite flick, Sorority House Massacre 2.

Best Indicator a Character’s Screen Time was up: Once someone ended up in the killer’s chair in the basement, they got razored, broiled, maced or stabbed, clothing optional.

Best Odd Couple: Bianca reconnects with her pizza-delivering ex-boyfriend as they try to figure out what happened to all the babysitters, even after she ripped him a new one for being unambitious.

Two and a half stars if you’re watching it alone and it’s not October. Three stars if you have a group together for a Halloween party and are looking to watch something different. Ideally pair Babysitter Massacre with another indy Halloween flick like HauntedWeen if you want to have a nice Halloween-themed double feature.

If you want to check out Babysitter Massacre, visit Henrique Cuoto’s Henflix store to get it via physical media or the three(!) paperback tie-in books to the flick. You can also buy some of other flicks he’s had a hand in producing or directing such as Ouija Room, Scarewaves or Haunted House on Sorority Row. He’s active on Joe Bob social media sites and absolutely would be happy to discuss the logistics of how to succinctly explain the motivational techniques necessary for a director to persuade one actress to bludgeon another one with a hammer while trapped in a basement while both of em are in lingerie.