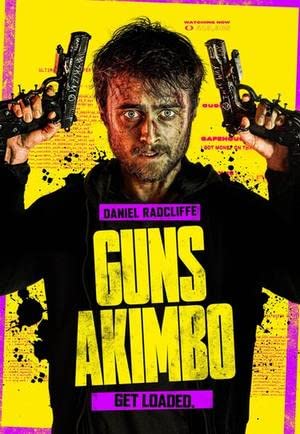 The Battle Royale flick gets John Wick-ified (Wick-eded?) AND live-streamed in Guns Akimbo, except the protagonist isn’t a stylish bringer of death who drives a muscle car and whose mere name incurs fear and trepidation among folks cause his dog got killed.

Nope. Here it’s Harry Potter. Or rather, Daniel Radcliffe, the guy who played the boy wizard in the grand-grossing indoor-bullstuff fantasy film series.

But before we scoff at the thought of Radcliffe helming an action flick, let’s give the guy credit. After making bank as Harry, now he gets to do some flicks that might REALLY MATTER to the Drive-In Mutant community at large. Yeah, some of it is stuff like The Woman in Black flicks and Victor Frankenstein, but he also was in Horns and in Swiss Army Man, that, while a bit on the artsy-fartsy end of things (very literally so in Swiss Army Man), it shows his heart is in the right place and, like Elijah Wood and Ethan Hawke, who both have done their share of indoor bullstuff, he’s not afraid to meet us where we live. And, of course, if you had ANY doubts about his weird cred, he did kind of play Weird Al in that great biopic that Roku put out last year.

In this one, he plays Miles, an asthmatic put-upon code monkey whose relationship went south with his girlfriend and her multi-colored hair, so now he’s filling the void in his life (how else?) by getting drunk at night and trolling the poo out of folks in the comments section of videos from this real-life deathmatch entertainment live-streamed series called Skizm while wearing his T. rex footie slippers surrounded by his action figure collection.

The reigning goddess of carnage in Skizm is the punky, tattooed, steel-fanged and post-traumatic Nix (an unrecognizable Samara Weaving looking like Natasha Lyonne did in “Orange is the New Black”) who is only participating in order to, why else, avenge the death of her family in a suspicious fiery car wreck that she survived. She gets hopped up on mind-altering substances, offs folks and, once she reaches a certain quota of dead folks, Riktor, the guy in charge of the game (Ned Dennehy, looking like Peter Stormare in the old “Unpimp the Auto” VW commercials or a tatted-up Michael Berryman), says he will let her go.

Miles’ trolling gets Riktor’s attention, who, like every great producer, always is looking for new victims, er, talent for the show. Because it’s the Internet and nothing is ever gone, they know where Miles lives. They show up to his apartment, perform some steampunk enhancements that involve riveting two handguns to Miles’ hands with metal studs, staples, epoxy and duct tape (the DIY Skizm crew’s not too concerned about sterility and just a touch more concerned about durability) and about 50 bullets. The guns are rigged so Miles’ll explode if he tries to get them taken off like they did to Snake in Escape From New York so that leads to a whole bunch of sight gags where we find out that it’s really hard for a guy to put pants on or pee when there are two hand cannons grafted on your hands.

Imagine if a keyboard warrior had Vince McMahon, Triple H and Roman Reigns (if they were a WWE troll) or Tony Khan, Chris Jericho and Kenny Omega (if they were an AEW troll) come to their house, drag em out and then make that person have a match with the reigning champ?

Same deal. Except there’s a lot of cat-and-mouse and gun battles until Miles convinces Nix that she’s being set up. There’s a rudimentary swerve until they team up to fight the real enemy in a final assault on Skizm HQ.

Best Way to Start the Flick: Nix does a U-turn and blows away a couple psycho rednecks in a pickup truck.

Best Way to Sedate a Guy: Two punches to the face, a blowdart to the neck and then another punch to the face when he starts coming to.

Best Soundtrack: Every time Nix goes on a spree, there’s usually a cover song playing — “You Spin Me Right Round (Like a Record),” “Ballroom Blitz.”

Best Reaction to Your Ex Having Two Hand Cannons Grafted to his Hands: Miles’ ex-girlfriend Nova pepper-sprays Miles and he falls out of her car.

Best Burn: The director of the Skizm feed roasts Riktor and his henchcrew by telling em they look like rejected bosses from “Streets of Rage.”

Best Help: A homeless guy named Glenjamin (Rhys Darby) criticizes the angle Miles was using when putting the gun in his mouth in a potential attempt to put himself out of his misery, helps him dress, gives him an eight-month-old hot dog and offers him crack.

Second-best Help: Nix gives Miles a few tips on how to use his guns while they’re engaged in a shootout in an abandoned building because of her embarrassment at his marksmanship.

Best Way of Giving Notice: “I’m sorry, just stop being a dick” to Miles’s boss before he gets shot.

Best Use of a Motorcycle: Nix does a wheelie onto the trunk of a Ford Focus she’s chasing, drives over the roof and tries to do a burnout on Miles’s face.

Best Description of a Minion: “What? Like those yellow butt-plug things from the movies?”

This one is directed by Jason Lei Howden. He did a flick called Deathgasm that you might just remember from Season Uno, Week Three-o of the “Last Drive-In.” Guns Akimbo maintains a lot of the frenetic pace and rebellious outsider/underground spirit with a hint of romanticism that Deathgasm has, but with less heavy metal and more silicon-cyber-gamer attitude, techno music and streaming involved. Plus at least 278 gunshots and multiple explosions and crash-and-burns.

Four stars if you can stand the sight of CGI blood. Three and a half if you can’t.

Check it out streaming on Amazon Prime and Apple TV or on physical media.